Activist artists let their work do the talking: Powerful sociopolitical elements run through separate exhibitions across Seoul this season

Activist artists let their work do the talking: Powerful sociopolitical elements run through separate exhibitions across Seoul this season 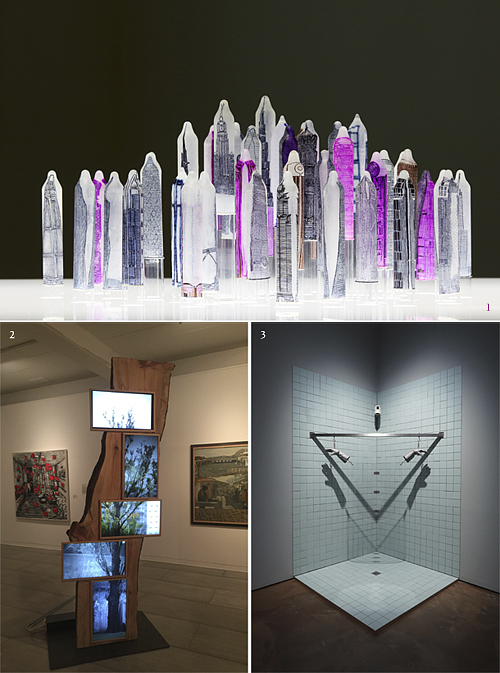 Each of the exhibitions deconstruct scenes of contemporary society with political, economic and social perspectives and reconstitute them into artworks. Then, the artworks together make a new kind of landscape - a sociopolitical landscape.

In the middle of Art Sonje Center’s second floor is a group of miniature versions of the world’s most famous skyscrapers. They look cute at first glance, but a closer look might make viewers feel embarrassed as the models are actually meticulous drawings on condoms. Over the models is a big painting hanging on the wall, which depicts a monstrous woman giving birth to numerous humans. They are part of Amsterdam-based Turkish artist Fahrettin Orenli’s solo exhibition.

The painting’s title is “Mother Nature, Birth of Another Bastard City I.”

This view is also reflected in another painting, “Blind Seoul,” which he created based on his impression of the Korean capital.

The title of the group of miniature skyscrapers is “High Heels.” According to the artist, the title is from a short story written by Turkish writer Omer Seyfettin. It tells a story of a rich woman who always wears high heels at home but one day, due to pain, stops. Then, she starts to hear her servants, whom she once believed to be nice and trustworthy, speaking ill of her, and realizes the high heels’ clacking had always been a warning to the servants. She then fires the servants. But, after laying off the servants and hiring new ones, she goes back to wearing her high heels at home.

“Just like the woman in the story, we are aware of our society’s problems, but not wanting to face them, we avoid them,” the artist explained.

He also pointed out that the world’s landmark buildings, which appear in the installation work, are mainly those of financial companies, touching on the global financial crisis that caused a chain reaction across borders and affected the lives of people all over the world.

These works, as well as other exhibits featuring meticulous drawings and paintings, photographs, video pieces, site-specific wall paintings and even poetry, show the artist’s long-held interest in the impact of economics and politics on the world.

The ninth edition of the group show “Korea Tomorrow,” held annually to review trends in Korean contemporary art, features more older artists than ever this year. Many of the 27 participants are stars of minjung art such as Hwang Jae-hyung, Lee Jong-gu, Lim Ok-sang and Shin Hak-chul.

Minjung art literally means the people’s art and refers to realist paintings with strong political or social messages against the Korean military regime of the 1980s and later conservative politics. The exhibition focuses on landscape paintings by the minjung artists, which delicately suggest or boldly expose common people’s hardships and pain.

For example, the winter landscapes of coal-mining towns in Gangwon, created by Hwang, reveal the difficulties of life there, even though the paintings have no human figures. Hwang, famous as a “miner-painter,” has been living in a mining town for decades.

The exhibition also includes works by younger artists. One of them is a installation work by Guem MinJeong entitled “Wailing Tree.” On a dead tree’s trunk are five displays showing the images of a different living tree. The tree, located in the Seodaemun Prison History Museum in central Seoul, has historical importance, because it is said that many independence activists during the 1910-45 Japanese colonial ruling held onto the tree and shed tears before they were executed.

Up-and-coming Chinese artist Gao Lei shows an installation made of found objects in his unique style at his first solo show in Korea in five years.

The installation “Confession” is impressive in particular, as it is made of simple daily objects such as gloves, bathroom tiles and a CCTV camera but gives off a dark and ominous mood by reminding the viewers of secret torture of political activists.

“The irony and ominous mood come from the combination of the most private space, a shower booth, and a CCTV camera, which shows big brother’s surveillance,” said the artist last week.

The artist added that he was inspired by the French philosopher Michel Foucault, who wrote the book “Discipline and Punish: The Birth of the Prison.”