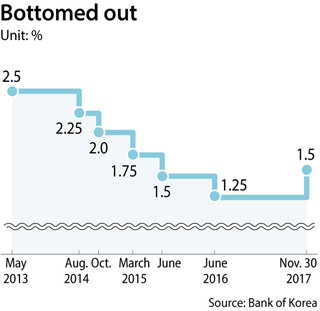 The Bank of Korea (BOK) raised its key interest rate Thursday for the first time in six years and five months on the basis of strong economic indicators, placing the central bank on a path to normalizing unusually low borrowing costs.

The move, which had been widely anticipated by analysts, lifted the rate from a record low of 1.25 percent to 1.5 percent, breaking a 16-month freeze.

Gov. Lee Ju-yeol made clear that the central bank needs to adjust the accommodative monetary policy it has adopted since 2012, but signaled the pace of change won’t be aggressive. The BOK’s rate setting committee was split on the rise Thursday, with one member dissenting in favor of a continued freeze.

“As the country’s economy continues to grow, maintaining the current interest rate of 1.25 percent would intensify the risks associated with the accumulated financial imbalances,” the governor told reporters after the monetary policy meeting.

When asked about the timing of further interest rate rises, the governor spoke cautiously.

“[The BOK] will take a measured approach in adjusting the accommodative stance,” Lee said.

Robust economic growth, strong exports and improved domestic consumption all contributed to the rise in the rate.

The economy expanded 1.4 percent during the third quarter compared to the previous quarter, and year-on-year growth was 3.6 percent - the highest in more than seven years.

Consumer confidence in November also hit its highest level in seven years, while exports enjoyed growth thanks to an upturn in global demand for Korean products, especially semiconductors.

With the Federal Reserve expected to raise interest rates in the United States in December, the BOK probably feared a capital outflow and pre-emptively moved to raise Korea’s rate.

International organizations including the International Monetary Fund (IMF) and the Organization for Economic Cooperation and Development (OECD) revised their forecasts for Korea’s 2017 economic growth.

Both the IMF and OECD pushed their forecasts to 3.2 percent, higher than the BOK’s projection of 3 percent.

The central bank estimated that this year’s growth will likely surpass its forecast of 3 percent.

Many analysts expect one to two rate increases next year given the governor’s carefully worded remarks and a leadership transition early next year.

“Right now, the market is looking at either the second quarter or the second half of next year,” said Lee Mi-seon, an analyst from Hana Financial Investment.

“Given that inflation pressures remain moderate, it is most likely that the central bank would raise the rate again in the second quarter.”

Lee’s term ends in March and a successor will be appointed.

But if the U.S. Federal Reserve moves to increase the key rate three times or four, the BOK might expedite the increases due to fears of capital outflows, the analyst said.

Kong Dong-rak, a researcher at Daishin Securities, echoed Lee’s view, but highlighted another factor - a scheduled change of leadership at the BOK.

“It will most likely take a breather in the first quarter and shoot for the second quarter,” Kong said. “However, just as the U.S. Fed, the Bank of Korea has also a variable, namely the change in the leadership,” Kong continued, “Considering the reshuffle during the first half, the central bank will likely take a wait-and-see approach. I think it will make its move in the early second half.”

Major concerns about the rate increase include higher debt repayment costs as the country faces a record level of household debt.

The hike is also likely to strengthen the won, which has been appreciating against the dollar recently.

“There are concerns that the rising interest rate might lead to more pressure on corporate debt and have negative effects on export competitiveness,” a source at the Institute for International Trade said.