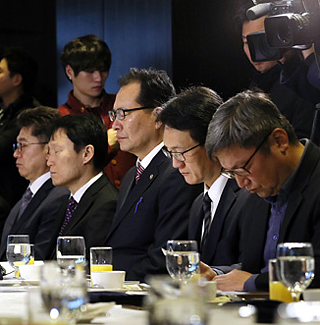 Koh Hyung-kwon, first vice minister at the Ministry of Strategy and Finance, center, and representatives from Christian organizations pray at a meeting to discuss taxing the clergy on Nov. 14 in Seoul. [YONHAP]

The government is one step closer toward taxing the clergy next year after the Ministry of Strategy and Finance announced on Thursday a piece of legislation that would legalize an income tax for monks, pastors and priests.

If all goes according to plan, it would end decades of exemptions for the country’s religious leaders, who have not had to pay income taxes since modern Korea was established after World War II.

The government will hold one more meeting with religious groups before finalizing the tax on Dec. 29.

Finance Minister Kim Dong-yeon has demonstrated strong desire to implement the nation’s first clergy tax, a resolve that was reaffirmed during a press conference on Monday.

“As we have promised earlier this year, our principle is to push on with the taxation of religious groups without any disruption,” he said.

In a meeting with religious groups, Kim noted he faced little resistance, as most of the community agreed it was necessary to pay taxes. Some religious leaders have even been paying taxes voluntarily.

However, he added that other groups might still have reservations because it will be their first time having to pay taxes.

“We have exchanged a lot of opinions, and we have been convinced on some of the issues that they are concerned about,” Kim said.

The National Assembly has been strongly supportive of taxing the clergy and turned down a proposal from several lawmakers on Wednesday for a two-year grace period.

The Finance Ministry estimates it will be able to collect roughly 16 billion to 20 billion won ($15 to 18 million) in taxes annually from the country’s 50,000 religious leaders. That’s double the tax revenue that the government has been able to collect in the past from voluntary payments by the clergy.

Based on a 2015 study, the most recent data available, the government has collected roughly 8 billion won that year from 26,000 religious practitioners.

“Catholics and Buddhist monks of the Jogye Order as well as several major Christian organizations have been voluntarily paying their taxes,” a Finance Ministry official said. “The goal is focused on realizing tax justice.”

In the Jogye Order, the largest Buddhist sect in Korea, monks working at social welfare and educational institutions have been paying income taxes. Several major Christian churches have been doing the same.

But because there is no law requiring the clergy to pay taxes, other religious organizations have been reluctant to pay.

For nearly half a century, the National Tax Service has been campaigning for a legal requirement.

The tax collection agency first raised the issue in 1968, and ever since, the Korean government has embarked on several failed attempts to tax the clergy due to strong opposition from the religious community, particularly conservative religious organizations, which wield heavy electoral power with their large congregations.

When the government drafted a bill in 2015, the conservative Christian Council of Korea opposed it, while liberal religious groups like the Presbyterian Church of Korea and National Council of Churches in Korea offered their support.

Those same liberal voices are now calling the current iteration of the bill too lenient on major churches. In the 2015 bill, the government offered only a few exemptions, such as money used toward education and food.

The current bill has expanded the exemptions. Payments that clergy leaders receive from their respective religious organizations, for example, will not be considered income.

The conservative Christian Council of Korea welcomed the government’s decision, claiming 80 percent of their requests were met, but the liberal National Council of Churches in Korea warned that the government was creating a loophole for tax dodgers.

The reverend said only 20 to 25 percent of Christian churches are able to stand on their own with just donations provided by their congregations, meaning major churches will not be affected by the new income tax.

The Korea Taxpayers Association has also taken issue with the benefits that religious groups have been receiving and demanded a tougher, more detailed taxation system.

The association estimates that religious organizations receive donations amounting to 7 trillion won a year - on top of tax benefits from the government amounting to 1 trillion won, including 300 billion won in deductions from local taxes including property taxes.

The Justice Party, a progressive party in the National Assembly, said in a statement Thursday that the government needs to fix its proposed tax plan, saying religious leaders would be able to deduct up to 80 percent of their income under the current plan.

Among the OECD’s 35 member countries, Korea is the only one that does not tax its clergy.

Japan taxes the clergy at the same rate as individual income earners, while in the United States, religious leaders face not just federal taxes but also state taxes.