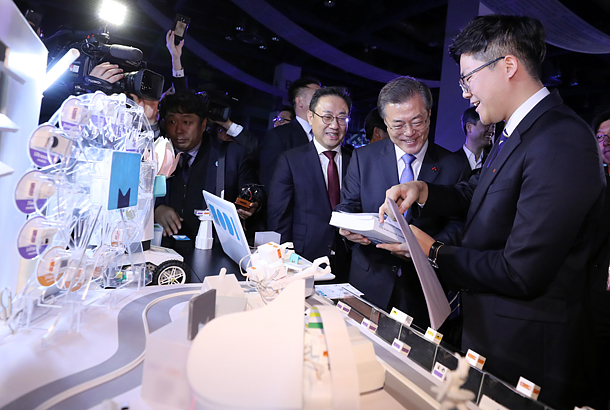 Oh Sang-hoon, right, founder of Luxrobo, a robotics start-up, talks about his company with President Moon Jae-in at the 2017 Startup Festival in COEX, southern Seoul, on Thursday. [YONHAP]

President Moon Jae-in pledged to protect small and medium-sized businesses from unfair practices at the hands of conglomerates in a speech officially launching the Ministry of SMEs and Startups on Thursday.

During a ceremony attended by 400 people at the COEX convention center in southern Seoul, the president called small and medium-sized enterprises, or SMEs, the “backbone” of Korea’s economy responsible for 88 percent of jobs.

“Policymaking and legislation for SMEs will be made through the Ministry of SMEs and Startups,” Moon said. “The government will keep SMEs from conglomerate’s exploitative and unfair business practices.”

The ministry was established in July by President Moon shortly after he took office. It succeeds the Small and Medium Business Administration, formerly an agency underneath the Trade Ministry.

Promoting the agency to the ministry level was part of Moon’s campaign pledge to level the playing field between conglomerates, also known as chaebol, and smaller businesses, and to support the country’s start-ups.

Describing himself as the son of mom-and-pop store owners, Moon cited a survey in which 77 percent of SME owners said their business relationship with large companies was “unfair” because chaebol were stealing technology from smaller businesses, forcing suppliers to reduce prices on parts prices and engaging in dodgy internal transactions.

In his speech, Moon noted that only 3 percent of the country’s 3.54 million SMEs are engaged in exports. The president said his government would offer assistance to help more companies export their products, including providing information on foreign markets.

The Ministry of SMEs and Startups brings the total number of ministries to 18. As a ministry, it will have more authority to manage policies related to SMEs, including those coming from other government departments.

During his campaign, Moon stressed that Korea’s economy, the fourth-largest in Asia, should be driven by income growth, and in order to achieve it conglomerates need to stop bullying smaller companies, he said.

Hong Jong-haak, the inaugural minister, echoed those sentiments, saying the ministry would serve as a protector of small and medium-sized businesses. He also promised to get rid of “unnecessary regulations” and “become a strong sponsor for new venture enterprises.”

A former lawmaker and economics professor, Hong was appointed by Moon in November despite objections from opposition parties over allegations of past ethical lapses.