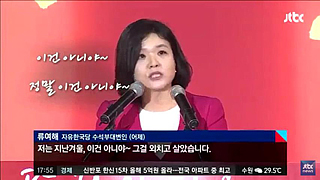 Ryu Yeo-hae, a first-term lawmaker and a senior member of the opposition Liberty Korea Party, was criticized for blaming the current administration for the earthquake in Pohang.

French philosopher Jacques Lacan said, “Desire is the desire of the other’s desire.” The essence of desire people have is seeking recognition from others. Francis Fukuyama also said that the most fundamental motive of humans to form a society was the desire to get recognition. The much-discussed “desire for recognition” online is another way to express human desire.

When others give recognition or praise, one may try to stay modest but cannot help feeling flattered. Men constantly seek to confirm their value and identity through recognition and evaluation from others. The desire also worked as an important motive for the development of human civilizations. The competition to get recognition and motivation for achievement is considered to be the main factor for capitalism’s triumph over communism in the 20th century. In fact, people without desire cannot be expected to advance and a society without desire can fall flat.

The problem is that the desire for recognition is hard to control or satisfy. It is like a drug and hard to escape from. So many people are obsessed with posting on social media and getting “likes.” Many try to draw attention and make unreasonable arguments. What they cannot bear is not getting recognition. Why aren’t people paying attention to me? Why is the world ignoring me when I am so talented?

When the desire crosses the line, the situation becomes serious. One may do whatever they can to fulfill the desire, pretending to be something he or she is not and using harsh words. Politics is the pinnacle of desire for recognition. A senior member of the Liberty Korea Party was condemned for blaming the current administration for the earthquake in Pohang. However, she must be happy as she got media attention and became more recognizable. How about party leaders? They use vulgar words day after day. They cannot bear not getting attention, and their desire for recognition is constantly expressed online and offline.

“If one remains not annoyed when he is not understood by people around him, isn’t he a sage?” said Confucius in the Analects. When the water is filled in the cup, the ball in the cup will rise to the surface. The world will give proper recognition to each one in the end. It is impossible to get out of the swarm of desire as long as you wish to be recognized. The uncontrolled desire for recognition is a cancer not only to the individual but to society.

*The author is the deputy editor of JoongAng Sunday.