A coat’s cost: one night in Lotte

A coat’s cost: one night in Lotte 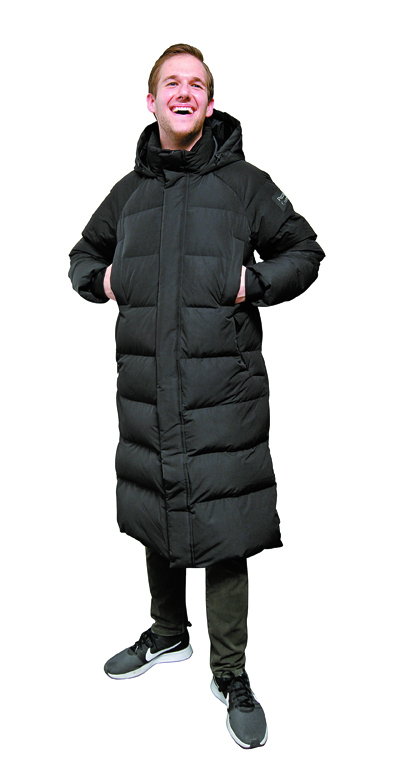 An American gets a warm feeling from going through a Korean retail adventure. [PARK SANG-MOON]

“PyeongChang…long…padding?” I asked in hesitant Korean as I slowly approached a crowd huddled in the basement of the Lotte Department Store in Jung District, central Seoul.

“Is this where we wait?”

It was 9:30 p.m. on Wednesday, the night before the final 3,000 PyeongChang Long Padding Winter Olympics-themed bench coats would be sold at four locations across Korea. Already there was a line of people seated on the floor, snaked along a hallway. When a department store worker handed me a piece of paper with a number on it, I learned that 217 people had arrived before me. I was No. 218.

We were in for an all-night adventure. In 11 and a half hours, Lotte would distribute the official tickets giving each person in line the right to buy one - and one only - of the final 900 coats to be sold at Lotte’s main branch. The actual transactions would take place starting at 10:40 a.m. Thursday morning.

It was a Korean version of Black Friday or Cyber Monday - with a single product being fought for.

Lotte is a sponsor of the 2017 PyeongChang Olympics and has the rights to make and sell Olympic merchandise. It announced in October that the pillowy, unisex, below-the-knee bench coats - which athletes typically wear when sitting on the sidelines waiting to go onto the field - would be a limited edition of 30,000.

Sales began at 20 Lotte retail outlets on Oct. 26 and Lotte soon realized that demand was much higher than supply. It decided to sell the remaining coats on three chosen dates: Nov. 22, Nov. 24 and Nov. 30. News of hordes of people waiting on the previous two days almost guaranteed that Thursday would be the biggest.

The price of the 80 percent goose down and 20 percent goose feather-filled coats was another motivating factor. At just 149,000 won ($137), they were half the price of comparable-quality coats in similar styles from well-known brands. 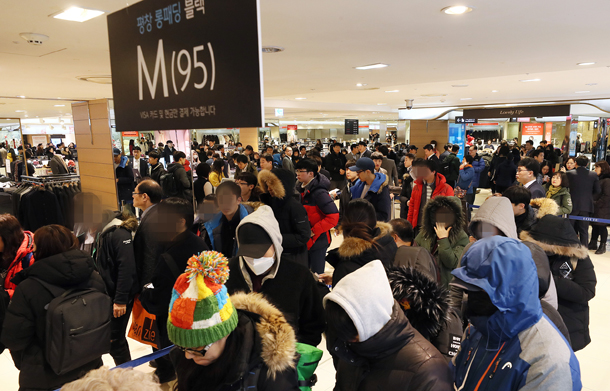 So whether from obsession or pure pragmatism, everyone waiting knew what it took to snag one of the precious coats: a night at the department store.

I had tried buying one the previous week at the Yeongdeungpo branch of the Lotte Department Store, in western Seoul, arriving 30 minutes before the store opened. After a brief wait at the front door with a group of middle-aged Koreans, a store employee came and explained with regret that the correct waiting location was the basement - and hundreds of people had been there overnight.

Unwilling to accept defeat and insisting that the store had miscommunicated, some people began yelling at the employee. One even grabbed his arm to prevent him from walking away, and a small delegation ventured into the store, vowing to find a higher-up that might try to calm the fuss by selling them some coats.

The crowd in the basement on Wednesday night was significantly calmer, especially after it was confirmed that there were enough coats in the right sizes for us all. Around 10:30 p.m., Lotte staff shepherded us into the store proper. We took off our shoes and entered large, warm conference rooms prepared for us to stay in overnight.

People set up sleeping areas and the scene started to resemble a jjimjilbang, or Korean sauna. I made a new friend, whom I’ll call Eric. Eric was around my age and fluent in Korean and English. He told me he had heard of the coat from friends, who had succeeded in buying it the previous week in Yeongdeungpo.

Eric wasn’t interested in the coat for its trendiness, but simply for its comfort.

We were only permitted to leave the conference room to use the bathroom. If we left the building, we’d lose our place in line. No one could assume out place in line going forward. When sales began the next morning - which seemed a very long time away - we would wait in separate lines depending on the size of the coat. If we changed our mind on the size we wanted, we’d lose our place completely.

After documenting my adventure on social media, I wrapped myself in my jacket - “Would’ve been warmer in long padding,” I muttered - and managed to fall asleep.

We awoke to a spread of Choco Pies and canned coffee.

“Look,” Eric said, showing me a photo on his phone. “This is the Jamsil branch.” The Lotte Department Store in Songpa District, southern Seoul, looked more crowded than our own branch.

And yet some 500 more people arrived at our branch during the night and were waiting outside.

At 9 a.m., we got our official tickets, and were told to be back at the store at 10:40 a.m. Perfect - enough time to shower, change clothes, and leave my old coat at home.

After the long night, waiting a couple more hours was nothing, and in what felt like an instant I was already at the final line-up. I waved over someone who was already wearing the coat and did a last-minute size check.

And in the last few moments before it was my turn to proudly whip out my credit card, I took another look at the crowd. It struck me that I was the only foreigner there - at least, the only visible foreigner. Several people had asked me along the way how in the world I had heard about the coat. Perhaps if not for my job as a copy editor at this newspaper, I would not have heard.

There’s something special, I thought to myself, about sharing such a poor night’s sleep with a room full of strangers. I was a foreigner, but also, I was just one in a crowd, curious to see what this coat was all about, proud to live in the Olympic host country and goofy enough to wait up all night to give someone my money.

Walking away with a smile, I put on my new coat. I felt warm.