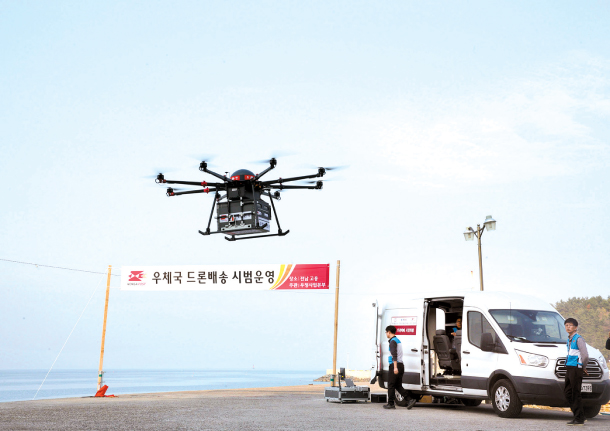 A drone operated by Korea Post takes off from a port in Goheung, South Jeolla, to deliver mail and packages to the residents of Deungnyang Island, which is about 4 kilometers (2.5 miles) off the coast. [KOREA POST]

Jang In-kil, the lone mailman on Deungnyang Island off the coast of South Jeolla, travels to a port in Goheung, some 40 minutes away from the island, by boat at 8 a.m. every day to pick up mail and packages for the residents of the island. By the time Jang returns with the mail, it’s already 3 p.m., which means it takes over eight hours every day for him to collect the mail for his neighbors on the island.

That eight-hour trip may be shortened to just one hour, thanks to a new delivery service by government-operated drones.

Korea Post, the national postal service provider, on Tuesday started a trial run of its delivery drone on Jang’s daily route. The drone flew the 3.8-kilometer (2.4-mile) trip from the port in Goheung to a community center on the island in just 10 minutes, half an hour less than the time Jang had to spend on the sea every day.

The drone was developed by Korea Post and the Electronics and Telecommunications Research Institute, a government-funded research institution based in Daejeon. Equipped with a camera and takeoff and landing control system as well as a storage unit for parcels, the drone can carry as much as 10 kilograms (22 pounds) worth of mail and packages.

During the test run, the drone delivered eight kilograms of mail, flying at an altitude of 50 meters (54.6 yards). After Jang unloaded the packages from the drone, it flew back to the port on the mainland. “It’s going to be much easier and faster to deliver mail and parcels to the residents [of the island] as the drone eliminates the process of traveling to the mainland to pick up the packages,” Jang said.

Korea Post is not the first organization to trial drone delivery.

Amazon, an American e-commerce giant, claimed in December that it successfully delivered items weighing about 2.5 kilograms in London. According to local reports in the United States, its delivery drones have been equipped with self-destruct features to keep people safe if they malfunction. 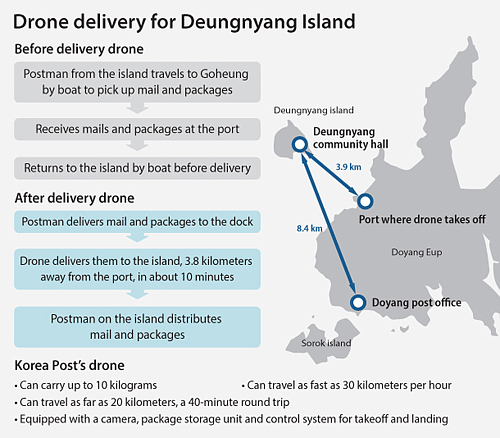 Last month, the Trump administration announced a three-year pilot program to designate certain areas around the country to enable drone companies to pilot-test their drones.

Still, it’s premature for Jang and other mailmen to count on the drone delivery service. Due to regulatory issues and a lack of related technologies in Korea, it will take years before the system can be fully commercialized. For Korea Post, it is looking at as late as 2022 before the drones can be used reliably to carry mail and parcels to remote places such as Deungnyang Island.

The Ministry of Land, Infrastructure and Transport recently revised aviation safety laws to allow drones to fly at night. But drones are still prohibited in large cities or within a 9.3-kilometer radius of airports.