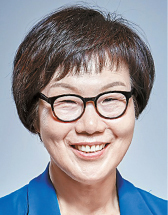 Lee Mi-kyung, a former five-term lawmaker, called for a return to the “basic spirit and principle of international development cooperation” as she was sworn in as president of the Korea International Cooperation Agency (Koica) on Wednesday.

“These basic values, including poverty reduction, human rights, gender equality and co-prosperity of mankind through sustainable development and global peace, should constitute the basis of our work,” said Lee in an inaugural address as she became the 12th president of Koica for a renewable three-year term at the agency’s headquarters in Seongnam, Gyeonggi.

Koica, founded in 1991, is the government agency responsible for Korea’s aid programs for developing countries.

Lee said she envisions the agency “will play a vibrant role in fostering responsible global citizenship in Korea and realizing a world of co-prosperity and shared growth, where human dignity and peace can be safeguarded and sustainable development may take root.”

When she served as a Democratic Party lawmaker in the National Assembly from 1996 to 2016, Lee was chairman of the parliamentary Special Committee on Housing and Welfare for Low Income People, and also on the foreign affairs and unification committee and land and transport committee. She also served as a ranking member of President Moon Jae-in’s election campaign.

“The public support and trust given by people toward Koica plummeted last year when the agency’s involvement in political scandals and influence-peddling came to light,” she acknowledged, recalling the candlelight vigils last year in Gwanghwamun Square in central Seoul that led to former President Park Geun-hye’s removal from office.

She called for an integrated Korean official development assistance (ODA) system, which is currently fragmented and inefficient, “to strengthen strategic collaboration between loans and grants” and also to assist developing countries in achieving sustainable development goals (SDGs).

In her address, she outlined various tasks for the organization including strengthening transparency and communication to prevent corruption, building partnerships with the private sector and civil society, bolstering global partnerships, expanding public participation and creating jobs for young people.

Lee earned her undergraduate and master’s degrees from Ewha Womans University and served as a visiting professor at the Graduate School of Policy Sciences at her alma mater over the past year. She also served as a co-head of the Korea Women Parliamentarian Network and president of the Korea-European Union Inter-Parliamentary Council.