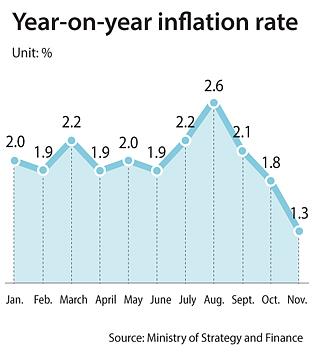 Korea’s consumer prices rose 1.3 percent in November year-on-year, a meager increase thanks to a reduction in the prices of utility bills, the Finance Ministry reported on Friday.

Compared to a month earlier, the November price index fell by 0.5 percentage points. The 1.3 percent price hike is the slowest pace of consumer inflation since January.

Utility bills such as tap water, electricity and gas also fell by 6.7 percent in November compared to the same period a year earlier.

While other prices were unchanged or fell, the price of gasoline last month showed the highest rate of increase at 8.2 percent year-on-year.

The price of gasoline per liter has steadily risen over the past year to 1,521 won last month from 1,417 won 13 months earlier as the Organization of Petroleum Exporting Countries (Opec) imposed oil production restraints that took effect on Jan. 1 this year. Opec struck an agreement Thursday in Vienna to continue production restraints until the end of 2018, paving the way for domestic oil prices to continue rising in the months to come.

If the current low inflation continues the Bank of Korea is likely to think twice before raising its key rate, which it increased from 1.25 percent to 1.5 percent for the first time in more than six years on Thursday, when the monetary policy committee meets in January.