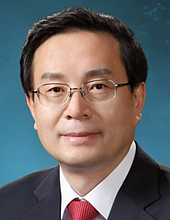 The nominee for Woori Bank chairman pledged to develop the bank into a more comprehensive financial group on Friday, with particular interest in buying an asset management firm.

“In the short term, we are considering acquiring a small asset management company,” Sohn said during a news conference. “To become a financial group, we need to focus on non-banking businesses to some degree,” though he added no specific deal was underway.

The company hopes to create a financial holding unit to better control different affiliates. Woori currently has seven affiliates, including Woori Card and Woori Private Equity, though the vast majority of revenue comes from the banking unit.

Sohn’s predecessor, Lee, resigned in the wake of a scandal involving favoritism in the bank’s hiring and in-fighting between executives after several banks were merged under Woori.

During the news conference on Friday, Sohn vowed to overhaul the recruitment process and address conflicts in the bank.

“Since Woori Bank is a merged unit, I can’t deny there are troubles concerning factional conflict,” he said. “But I will try to minimize the tensions during my term and won’t sway toward one specific faction.”

Sohn promised to reform the company’s promotion system to strictly focus on employees’ performance. Woori Bank has so far been following an internal rule to promote an equal number of employees from the now defunct Hanil Bank and Commercial Bank of Korea, which merged in the late 1990s to form Woori.

“We will introduce a merit-based promotion system instead of meeting the same ratio of employees,” he said.

As for the hiring scandal, where it was discovered that sons and daughters of government and VIP clients were favored, Woori Bank launched a task force last month to improve its hiring process and corporate culture. Team members will oversee all stages of the hiring process, the company said.

The bank also plans to reintroduce a written test in its recruitment process after getting rid of it 11 years ago to bring in people from more diverse backgrounds.

Sohn also said he would cooperate with the government in selling its stake of Woori Bank.

“The government and state-run Korea Deposit Insurance Corporation are the ones leading negotiations for the sale,” he said, “I will cooperate as much as I can.”

The KDIC holds a roughly 18 percent stake in Woori Bank and plans to sell its share next year.

Other focuses that the nominee underlined on Friday include expansion into Southeast Asian markets and pushing forward with digitizing its services.