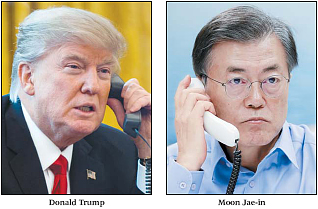 The Blue House denied Friday that Seoul and Washington are discussing a naval blockade against North Korea, following media speculation about such a response to Pyongyang’s latest test of a new intercontinental ballistic missile.

“A naval blockade was not mentioned during President Moon Jae-in’s telephone conversation with U.S. President Donald Trump,” said a senior presidential official. “I checked directly with President Moon and National Security Advisor Chung Eui-yong and they told me that no discussion or report on this matter has taken place. I want to assure you that a naval blockade is not being discussed between the governments.”

The North fired a new and more powerful intercontinental ballistic missile on Wednesday, ending a 75-day stretch of not testing missiles or nuclear weapons. Later the same day, Pyongyang announced through its state media that the missile was “tipped with super-large heavy warhead which is capable of striking the whole mainland of the U.S.,” and declared that it had “finally realized the great historic cause of completing the state nuclear force.”

Since the test, Moon and Trump had two phone calls. The first took place on Wednesday and lasted about 20 minutes. During the second conversation, which began 10 p.m. on Thursday, Moon and Trump talked for one hour.

Asked if South Korea has any plan to participate in a naval blockade in the future, he said, “At this point, I don’t think there will be a discussion on the matter. I do not have detailed information, but a naval blockade needs a new resolution from the United Nations Security Council. We also need to make a separate assessment on the effectiveness of such a measure. “

Speculation quickly grew after U.S. Secretary of State Rex Tillerson threatened a maritime interdiction in a statement in response to the latest North Korean missile test. “In addition to implementing all existing UN sanctions, the international community must take additional measures to enhance maritime security, including the right to interdict maritime traffic transporting goods to and from the D.P.R.K [North Korea],” Tillerson said.

A senior South Korean Foreign Ministry official admitted that maritime interdiction is a possibility. “There are not that many options left for additional sanctions,” he told the JoongAng Ilbo. “Maritime interdiction and an oil embargo are the biggest options.”

When the UN Security Council adopted a new sanctions resolution in September to punish the North for its sixth nuclear test, the United States attempted to include maritime interdiction, an attempt to secure legal authority for the international community to use military force on the high seas to stop, board and seize ships from North Korea and its trading partners if they were suspected of sanctions violations. Russia and China opposed the measure, and the resolution was left with a toothless clause requiring “the consent of the flag state” and “reasonable grounds” to carry out such operations.

The United States already operates the so-called Proliferation Security Initiative (PSI) to stop ships and airplanes suspected of transporting weapons of mass destruction. The initiative was launched by George W. Bush in 2003.

“PSI only has about 90 member states, so there is a limit,” a diplomatic source told the JoongAng Ilbo. “The United States wants to have a stronger UN Security Council resolution to allow maritime interdiction as strong as the power allowed in the PSI.”

Some are arguing that a naval blockade, a far stronger measure than maritime interdiction, is necessary to punish the North. That option is modeled after the Kennedy administration’s 1962 blockade of Cuba, which effectively ended the Soviet attempt to establish missile bases on the Caribbean island.

“Short of direct military action, a multinational naval blockade of North Korea is not only palatable; it may be the only alternative,” wrote Gregory Keeley, a retired lieutenant commander of the U.S. Navy, on The Hill website.

Keeley, who served as senior adviser to a vice chairman of the House Armed Service Committee and to a chairman of the House Foreign Relations Committee, also wrote, “U.S. allies in the region would support the initiative of a U.S. Navy-led blockade. Key players in this effort would be Japan and Australia, with support likely from Singapore, South Korea, India, Taiwan and potentially NATO forces.”

Some saw Trump’s move to deploy U.S. air carriers to the peninsula as a signal of a naval blockade in the making. From Nov. 11 to 14, the United States mobilized three aircraft carriers to the East Sea for a joint exercise with the South.

But it remains to be seen if a naval blockade is a tangible option because it is technically an act of war.

While the Blue House did its best to downplay the possibility of a naval blockade against the North, Defense Minister Song Young-moo said Friday that Korea will consider participating in a U.S.-led blockade if an official demand is made.

At the Defense Committee of the National Assembly, Song said the United States has not made any proposal for Korea’s participation in such a blockade. Asked what Seoul would do if Washington makes an official request, Song said, “We will have to consider it.” The Defense Ministry later explained that Song was referring to the maritime interdiction, not a naval blockade, dismissing that there was any disagreement between the minister and the Blue House.

Meanwhile, Moon and Trump appeared to have disagreed in their assessments of North Korea’s latest missile launch. According to presidential spokesman Park Soo-hyun, Moon told Trump during their second phone conversation that he is skeptical about the North’s completion of intercontinental ballistic missile capability.

“Although the missile fired on Wednesday clearly demonstrated the most advanced capability of the North, it was not proven that the North mastered critical technologies such as re-entry and terminal stage guidance,” Moon was quoted as telling Trump by Park. “It is also unclear whether the North mastered the miniaturization technology for nuclear warheads.”

The White House briefing about the phone conversation, however, made no mention of Trump’s assessment of the North’s capability.