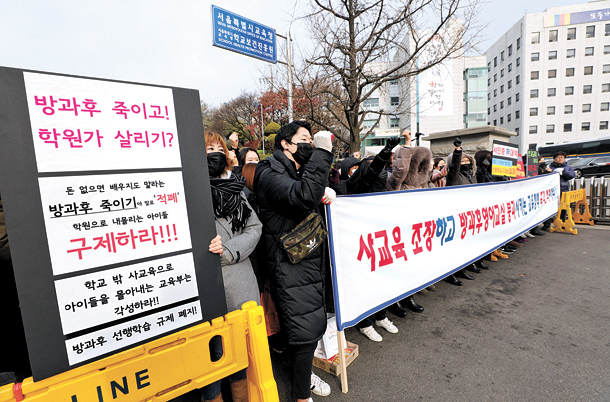 After-school program teachers gather at the Seoul Metropolitan Office of Education located in Jongno District in central Seoul on Nov. 28 to protest against the ban on after school English classes for first and second grade students next March. [NEWS1]

Elementary school parents and after-school teachers are speaking out as a law banning English classes at first and second grade public after-school programs is scheduled to be enforced in March.

Parents and public after-school teachers are turning to the Blue House’s online petition page to write their complaints.

“240,000 first and second grade students out of 4,800 elementary schools in the nation take English classes through these after-school programs,” wrote one petitioner on Nov. 16. “Please allow the programs to continue teaching English so that school parents are not financially burdened by the cost of private English education fees.”

As of Friday, the petition received 12,858 supporters.

The ban stems from a law created by the Ministry of Education in 2014 that outlines a list of permitted school subjects and after-school programs. English classes were only allowed to be taught in grades three and up.

Due to complaints after the introduction of the law, however, after-school programs were temporarily allowed to teach English for three and a half more years under a presidential decree.

“We believed it would be more critical for students in those two grades to learn Korean properly than English,” explained an official from the ministry. “Though we delayed the enforcement, it will be effective starting in March.”

Some parents and teachers, however, believe that the ban will result in an increase in private English education through private hagwon.

“Are you telling us to send our kids to expensive hagwon when our kids can already receive good quality English education [from the after-school programs]?” questioned one petitioner on the Blue House page, “This is part of a political agenda to increase private education.”

A total of 7,000 teachers, including native English-speaking teachers, are predicted to lose their jobs if the law becomes effective in March, according to Lee Joon-ho, an administrator of a national after-school program organization.

Some after-school program teachers protested in front of the Seoul Metropolitan Office of Education on Nov. 28, raising placards that read, “It is a deep-rooted evil to kill after-school programs and telling economically disadvantaged students to not learn; Save children who are being pushed away to hagwon!!!”