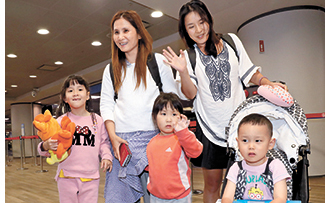 Korean tourists stranded on the holiday island of Bali, Indonesia, due to an erupting volcano, arrive Thursday night at Incheon International Airport via a special Korean Air evacuation flight. [YONHAP]

The government rescued 266 Koreans stranded on the holiday island of Bali, Indonesia, due to an erupting volcano.

Other Koreans got off the island on different planes.

“In addition, 179 Korean citizens returned to Incheon via a special flight by Korean Air at 9:20 p.m. on Thursday,” a ministry spokesman said. “Another 544 people arrived in Korea at 9:30 a.m. Friday aboard a Garuda Indonesia plane.”

This was the third time the government sent a charter plane to a foreign country to bring back its citizens. The first time was in August 2014 when Koreans were stranded in Libya after the ouster of long-time dictator Muammar el-Qaddafi. The government sent a Navy ship and special flights by Georgian Airways and Korean Air.

In April 2015, the government sent a chartered Korean Air plane to Nepal to bring back travelers stranded by an earthquake.

The international airport in Bali was closed down on Monday because smoke and ash from Mount Agung threatened the safety of airplanes landing or taking off. The government used a system established after the Nepal earthquake. At that time, students on field trips in Nepal were stranded and it took the government six days to send a chartered plane because the Foreign Ministry did not have the budget.

In 2016, the government earmarked 1.5 billion won ($1.38 million) to charter planes for emergencies in a foreign country. Because it costs about 500 million won to send a plane to the Middle East, the budget plan assumed three flights a year.

In June 2016, the Foreign Ministry signed a cooperation agreement with Asiana. The flight to Bali was the first under the agreement.

And yet, the mission had some difficulties. Because Bali’s airport was closed, the government chartered buses on Wednesday to transport the Korean travelers to Surabaya, which took 15 hours of travel on land and by sea. Arrangements for the chartered flight were decided later that day.

In the meantime, the airport in Bali resumed operations and Korean Air decided to send a special flight, allowing travelers who stayed on the island to return directly to Incheon.

“When the government decided on the plan to bring back the people through Surabaya, the volcanic eruption was very threatening and it was hard to estimate when the airport would reopen,” said a Foreign Ministry official. “Although those who stayed in Bali ended up returning earlier and more comfortably, the government had to choose the safest way for its citizens.”

Meanwhile, Korea has decided to provide $100,000 in humanitarian aid to volcano-hit Vanuatu, the foreign ministry said Friday. The government of Vanuatu ordered the evacuation of around 11,000 residents of Ambae, a Vanuatuan island, after declaring a state of emergency Sept. 25 over a volcanic eruption there.