Be careful with pardons

Be careful with pardons 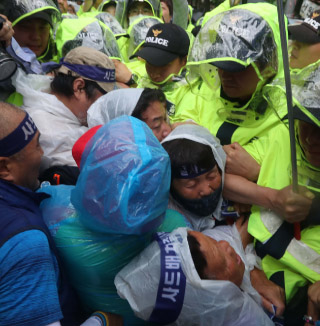 Protesters fight with police in front of the Blue House on July 31 after the government made its decision to deploy additional Thaad batteries in Seongju, North Gyeongsang. [KIM SANG-SEON]

Over 10,000 construction workers aligned to the militant Korean Confederation of Trade Unions occupied Mapo Bridge in the middle of Seoul last week for their march toward the Blue House, causing havoc during the evening rush hour. Raid police pitifully tried to block the crowd from making further advances.

The liberal Moon Jae-in administration is mulling over offering special pardons for protesters who were arrested or charged for their illegal interruption of state construction of a naval base in Jeju Island and electricity towers in Miryang as well as in an urban development site in Yongsan and the Sewol ferry disaster rallies. Criminal records from their involvement in the five high-profile rallies will be cleared, and those behind bars will be released if all goes well.

The amnesty for civilians standing up for their rights is a demonstration of goodwill and can help bring harmony. But it nevertheless must not send the wrong message of condoning illegal rallies and protests. The special pardon is an executive power of the president that does not require an approval from the National Assembly.

A government employee told me that no national projects can be administered without seeking consent from the unions and civilian groups. “They are our boss,” he said. The “power chain” has changed under a liberal president. Civilian groups and unions have gained political power. They dominate the cabinet and Blue House. The government’s offer of special pardon to dissidents and protesters is a symbolic show of the power of the new mainstream.

The special pardon has become a ritual to display new power. Since the pardon law took effect in 1948, nine presidents have so far issued 83 special pardons, relieving 226,000 people. Politicians, bureaucrats, and businessmen imprisoned for corruption were often bundled in the pardon list.

Pardons can relieve the socially disadvantaged from unjust punishment. But professional demonstrators who wield violence against law enforcement officers and interrupt public projects do not fit into the description.

The pardon is already being questioned for its political motives. Who will fear and defend the law if the ruling power uses a pardon to relieve people who share his political leanings?

The act of the presidential pardon must be put to social debate. Pardons are a legacy of monarchy. A king pardons someone as an act of grace. Punishment and pardons were instrumental in defending and strengthening the monarchy. Our presidents in the past used their pardoning warrant to show off their kingly power. Therefore, it could be considered a “past ill” which President Moon Jae-in is so earnestly trying to do away with.

Moon said that the public polls and debate over whether to keep the Shin Kori 5 and 6 reactors alive showed how matured our democracy has become. As in the reactor case, it is also debatable whether pardons are an abuse of power or a means to bring about social unity. The issue should be discussed.

If the Blue House is not up to the idea, the people should make it a priority. The public should make a motion through a petition on the Blue House website. The presidential office has vowed to answer to the motion if it gathers 200,000 electronic signatures. A pardon does not have legal justice if it is not approved by the people.

All people are equal before the law. It is wrong to decide who should be pardoned or not by a handful of people in the administration. If President Moon wants to be remembered as someone who voluntarily yielded the mighty presidential power for the sake of our nation, he should reconsider the idea of granting special pardons for violent protesters. Gone are the days when an act of grace can win over the people to his side.