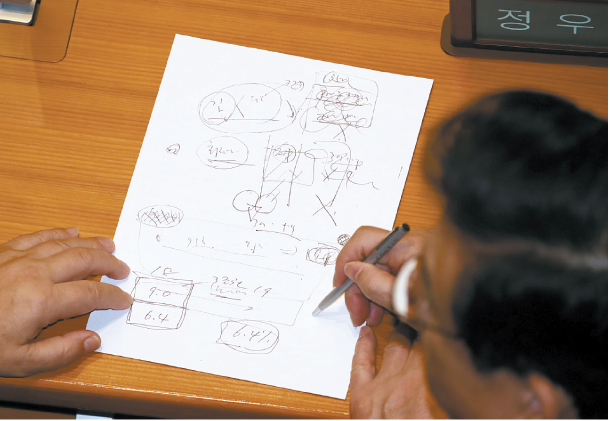 Chung Woo-taik of the Liberty Korea Party writes the number of government employees to be hired, which led to disagreement among parties and the failure to meet the budget before the Dec. 2 deadline, at the National Assembly on Saturday. [YONHAP]

As the National Assembly failed to pass next year’s budget by the Dec. 2 deadline, which is the first time this has happened in four years, there is growing concern that the delay could hurt the economy early next year.

“There are numerous new projects such as funding for job stability and child care subsidies and the related [government] departments can only prepare for it without disruption only when the budget is confirmed,” said Finance Minister Kim Dong-yeon on Saturday. “The reason we wanted the budget to pass by the deadline is because once it is passed we would have a lot of work to do.”

After hours of negotiation on Friday, the ruling and opposition parties failed to reach an agreement on the number of newly increased public servants next year, as well as the job stability fund that was to subsidize self-employed entrepreneurs and small businesses, who will be burdened due to the higher minimum wage next year.

“[The ruling and opposition parties] have had a lot of discussions, but at the end failed to resolve our differences,” Woo Won-shik, the ruling Democratic Party floor leader, said Saturday. “The areas that had the biggest differences were the budgets related to the increased number of public servants and the job stability fund resulting from the higher minimum wage.”

Chung Woo-taik, the floor leader of the conservative opposition Liberty Korea Party, said that all parties need a “cooling-off period.”

According to the People’s Party floor leader Kim Dong-cheol, while the Democratic Party was willing to accept the Moon Jae-in administration’s proposal of hiring 150,000 central government employees next year, the Liberty Korea Party demanded that the number be reduced to 7,000 and the People’s Party lowered the number of new hires to 9,000.

The parties also clashed over the near 3-trillion-won ($2.77 billion) budget that was to be used on small businesses burdened by the higher minimum wage.

While the opposition parties wanted the subsidy to be limited to only next year, the ruling party did not want to put a deadline on the program on the grounds that it should be applied flexibly accordingly to the changing economic situation.

The National Assembly will be holding another meeting later today.

The delayed budget comes at a time when the Korean economy has been picking up a strong momentum that has been absent in the last couple of years. After the nation’s economy showed surprising quarterly growth in the July-September period of 1.5 percent thanks to robust exports led by semiconductors and the solid global economy, there has been optimism that the economy, even when seeing slower growth in the fourth quarter, would easily slide into annual growth of 3 percent.

In fact, last month both the International Monetary Fund (IMF) and the Organization for Economic Cooperation and Development (OECD) raised Korea’s growth outlook for this year to 3.2 percent. The last time the economy grew at this level was in 2014.

Also, the Moon administration’s supplementary budget contributed to this year’s solid growth. The government’s contribution to the third quarter’s growth amounted to 0.4 percentage points, double the 0.2 percentage points made in the second quarter.

However, the government is concerned that the delay in the budget implementation early next year could lead to a loss of momentum.

“Meeting the deadline is very important for the swift execution of the budget that will lead to policy results,” said Kim. “Especially if the budget fails to meet the legal deadline, not only will it be difficult to tell when the budget will be passed, but also, execution of the fiscal policies would face disruption early next year.”

One of the key policies that the Moon administration has been pushing for has been increasing jobs. The Moon administration’s key economic policy is creating sustainable growth with expansion in the job market in the hopes of hiring 30,000 new employees in the public sector, including 15,000 in the central government to encourage the private sector to follow suit.

It is believed increased will lead to income growth, which in turn will lead to larger consumption and further advance the nation’s economic growth. The economic policy also includes an increase in the minimum wage, which has been raised by more than 16 percent for next year.

According to Statistics Korea, the number of new hires in October fell below 300,000. If the budget is delayed, support for hiring youth could be affected.

The Moon administration set the budget for jobs at 19.2 trillion won, a 12.4 percent increase compared to this year. However, the opposition parties consider this a waste of taxpayer money, especially since an increase in public servants means a larger budget.

The opposition parties insist that the job market should be determined by the private sector and not led by the government. Also, they oppose government subsidies on smaller businesses to ease the rising labor cost resulting from the higher minimum wage, which the Moon administration has promised will reach 10,000 won per hour by the end of 2020.

This means that the government will probably have to inject more taxpayer money into the program.

Additionally, while the government is confident about the course the economy is now on, new risks have emerged, including the strengthening of the won against the U.S. dollar and higher interest rates. In a report released on Sunday, Hyundai Research Institute projected that the current momentum could be short-lived.

“Both the composite indices shows the current momentum of the economy is showing signs of falling,” said Ju Won, Hyundai Research Institute’s chief economist, “which means that we cannot exclude the possibility of the current recovery ending shortly.”

Sung Tae-yoon, professor of economics at Yonsei University, said while the delay may not have an immediate impact on the economy or even the government’s policy, the longer it takes for it to pass the National Assembly the more uncertain things will become.