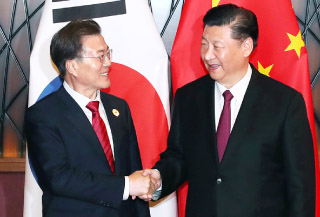 President Moon Jae-in shakes hands with Chinese President Xi Jinping on Nov. 11, before a summit on the sidelines of the Asia Pacific Economic Cooperation Summit in Vietnam. [JOINT PRESS CORPS]

China has lifted the ban on group tours to Korea, which lasted eight months. While the ban has been lifted, the flow of tourists hasn’t recovered yet. It didn’t meet the anticipation of the people hoping for a full restoration after Korea and China agreed to improve relations on Oct. 31. Replies on online articles show that the anticipation is turning to disappointment.

The government explained that the October agreement sealed the controversy over the Thaad deployment. China won’t mention Thaad again and would lift retaliatory measures in a matter of time. However, developments after the agreement suggest that the Thaad controversy is hardly concluded. Chinese President Xi Jinping and Premier Li Keqiang mentioned Thaad in the meeting with President Moon Jae-in, and foreign minister Wang Yi also brought up the issue to Korean counterpart Kang Kyung-wha. It seems that China is not leaving the subject alone, but is resuming suspended exchanges while addressing the Thaad issue separately. A Chinese diplomat reportedly protested by asking why the subject is considered sealed.

What caused the discrepancy? There are two possibilities. China could have agreed to seal the issue but changed its position later. Or China did not agree to seal it, but Korean authorities misinterpreted the deal. It is not uncommon to misinterpret the intention of others due to wishful thinking. China’s explanation suggests the latter. Of course, the Korean side has reasons to say that the issue is sealed. Unless the conversation in the diplomatic negotiation is released, there is no way to know which side is right. But the truth should be somewhere in between.

The situation clearly revealed that the government’s interpretation of the Oct. 31 agreement as sealing the Thaad controversy led to people’s anticipation for restored Korea-China relations, but China is not ready to respond. Moon is scheduled to make a state visit to China in mid-November, and the working-level officials preparing for the visit say that China may be pressured by Korea’s eagerness to consider the state visit as the sign of improving relations. The working level officials are said to be struggling between the Blue House and the Chinese partners.

Here, it is best to lower expectations. The Park Geun-hye administration failed in relations with China largely because of disappointment after having expectations that were too high. We must not repeat the folly of failing to see the objective truth about others, as anticipation becomes disappointment and then antagonism.

*The author is Beijing bureau chief of the JoongAng Ilbo.