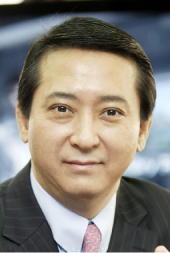 LG U+ CEO and Vice Chairman Kwon Young-soo stressed that the firm will grab the lead in 5G networks and artificial intelligence next year in an email sent to employees, according to the company on Sunday.

“It’s about time we give our all to truly take the lead in 5G networks and AI - sectors that will decide the company’s future,” said Kwon in the message to employees.

The email came on the same day the local mobile carrier announced the final results of their annual reshuffling.

“2018 will mark a beginning of full-fledged competition for future growth engines like 5G networks and AI, which is why I expect a fierce match between the players in our industry,” he added.

On Friday, LG U+ announced the creation of a “5G promotion team,” which will focus solely on developing the next generation of high-speed networks.

Kwon specified in his message that the team will develop comprehensive strategies related to 5G network operations from securing frequency, making investments and selecting equipment companies to work with. The team will also devise new consumer services based on the faster 5G network.

The company’s AI Business Development team has been moved and will now operate directly under the CEO. The team was previously a part of the larger “Future and Convergence division,” but from now on it will report directly to Kwon as an independent team.

“It’s very important that there is active communication and cooperation between [the AI Business Development team and] divisions closely related to AI technology, such as home media, the Internet of Things and business-to-business,” Kwon said. He explained that setting the AI Business Development division as a separate team directly under his wing will speed up the communication process amongst them.

Vice President Kwon has been with LG U+ since late 2015.