With new leadership, KAI looks to the future

With new leadership, KAI looks to the future

Engineers at Korea Aerospace Industries work on T-50 supersonic trainers and Surion helicopters at an assembly factory in Sacheon, South Gyeongsang. Right above: A Surion helicopter designed for the Korea Forest Service shows its irrigation capability in Sacheon on Friday. [KOREA AEROSPACE INDUSTRIES]

SACHEON, South Gyeongsang - Korea Aerospace Industries, the country’s largest defense company, is preparing to move forward after being embroiled in a number of corruption cases, which led to the indictment of its former CEO.

After the Moon Jae-in administration took office in May with vows to eradicate corruption in the defense industry, KAI became the first target to be raided.

In the process, 12 executives, including former CEO Ha Sung-yong, were indicted on corruption charges, including embezzlement and unfair hiring.

In addition, the Board of Audit and Inspection reported in July defects in the Surion utility helicopters that were being delivered to the Korean army. The company’s stock prices subsequently plunged, until a month ago when the new CEO, Kim Jo-won, former secretary general of the country’s auditing body, officially replaced Ha and assured workers and the public that “all will be settled soon.” 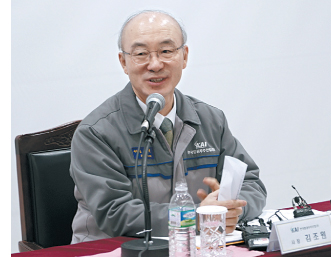 When a group of reporters visited KAI’s headquarters and its helicopter manufacturing plant in Sacheon on Friday, a Surion helicopter flew in near the reporters. Kim, along with key executives, wore grey jumpers with company logos and were eager to show reporters that KAI is recovering and is ready for future deals, including the delivery of Surion helicopters to government institutions and the local maintenance, repair and overhaul (MRO) for commercial airplanes as well as the ongoing bid from the United States for advanced pilot trainers (APT), a project KAI participated in with Lockheed Martin.

At KAI’s aircraft assembly factory, which is about the size of three soccer fields, workers were busily working on Surion helicopters as well as the supersonic trainer T-50. The factory has dual production lines, each with 11 stations for trainer jet assembly, and a single line of nine stations for helicopters. It takes about seven to 10 days to pass each station.

At the far back of the room was a T-50TH, a supersonic trainer modified for exports to Thailand. The country ordered four in 2015 for delivery in January, and added eight more in a second round of orders in July. While the recent investigation has influenced orders to other countries like Indonesia, Argentina and Botswana, the company was hoping to ramp up orders soon and is in talks with multiple countries.

But the largest ongoing deal related to T-50 trainers is the APT deal with the United States.

As price is a key aspect of winning the APT bid, KAI is adjusting the cost of its trainers in negotiation with Lockheed Martin to set a range that is competitive but fair. APT is a $16 billion bid to replace 350 outdated U.S. pilot trainers. The decision was expected to be made by the end of this year, but has been pushed back to early next year.

Despite the defects reported in the Surion helicopters, which included ice forming inside the helicopter when the temperature drops to minus 30 degrees Celsius (negative 22 Fahrenheit), deliveries of the units to the army resumed on Nov. 24, as the Defense Project Promotion Committee, under the Defense Acquisition Program Administration, decided it is time to swap out older models, and because the military rarely operates aircraft under extreme icy conditions. Besides, Kim said, the Surion will soon pass all safety checks.

With five units already delivered as of last month, the company plans to deliver four more by the end of this year and the remaining 14 during the first quarter of next year to complete the total order of 90 units.

A team from KAI left for Michigan, in the United States, to conduct ice testing last month. The test requires that the helicopter be able to remain at minus 30 degrees Celsius with some humidity for at least 30 minutes, which are difficult conditions to find or replicate, said KAI. The team plans to complete its testing by June.

In the meantime, derivative models of Surion helicopters will be placed at major government institutions as scheduled, starting next year.

The helicopter that greeted reporters was a derivative designed specifically for the Korea Forest Service. The 20.5-billion-won ($18.9 million) helicopter, scheduled for delivery in April, includes a hover refill pump to fill its 2,000-liter (528-gallon) water tank.

It will be used for irrigation and putting out forest fires. While most helicopters currently owned by the Korea Forest Service fly at 148 kilometers (92 miles) per hour, the new Surion will be able to travel at 240 kilometers per hour.

Another derivative designed for a fire station in Jeju will also be delivered around April. Five helicopters for police and two for maritime police are also in production for delivery.

“Without Surion utility helicopters, government institutions had to depend wholly on foreign-made helicopters,” KAI said in a statement. “But as various derivative models can be produced based on Surion, Korea’s dependence on foreign helicopter makers will gradually be reduced.”