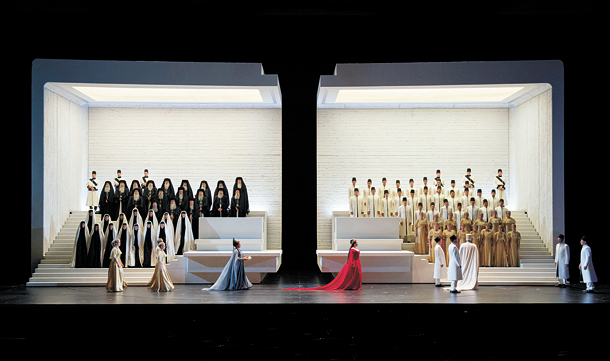 Every summer, the city of Salzburg, Austria, becomes an epicenter of the classics. Since 1920, the Salzburg Festival has been staging hundreds of classical masterpieces each year in the fields of opera, concert and drama. As the countdown before the festival’s 100th anniversary in 2020 begins, the organizers visited Seoul on Friday to introduce the program for next year’s festival - kicking off on July 20 for five weeks.

More than 200 performances will be staged next summer, with Mozart’s “Die Zauberflote,” or the “Magic Flute,” opening the festival in Salzburg, the birthplace of the legendary composer.

Markus Hinterhauser, artistic director of the festival, said that the “Magic Flute is one of the most performed and popular works that is perfect to open next year’s festival.”

“Only at first glance does ‘Die Zauberflote’ seem alien in this context,” explained Hinterhauser. “However, Mozart’s opera functions as a kind of microscope in connection with all these pieces.”

“It not only has the fairy-tale elements that children can enjoy but also the complex philosophical elements that can be witnessed in our society for adults to sympathize with,” Hinterhauser added.

Although it is a popular opera that many enthusiasts have already seen, the artistic director says this production will be quite “refreshing” as young, rising stage director Lydia Steier will take the helm.

Another noteworthy performance is Hans Werner Henze’s opera “The Bassarids,” which premiered at the festival in 1966.

“The festival commissioned the work in 1966 and we are happy to bring it back,” Hinterhauser said.

According to Helga Rabl-Stadler, president of the Salzburg Festival, about 3,000 of the 230,000 tickets were purchased from Korea this year, adding that she believes Koreans have a high level of appreciation for classical works and that “they’ll really be able to enjoy an array of renowned performances during next year’s festival as well.”

Unfortunately, there will be no Korean artists appearing next year. However, Hinterhauser said they are in discussions to invite star pianist Cho Seong-jin to perform at the 100th anniversary festival in 2020.

Korean soprano Vittoria Yeo alternated the role of Aida in Verdi’s “Aida” with soprano Anna Netrebko during this year’s festival.