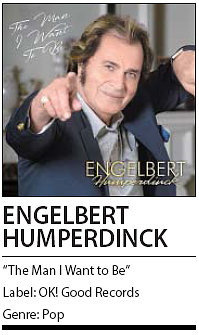 There’s hardly a false note on Engelbert Humperdinck’s “The Man I Want to Be.’’ No rapping, no clumsy evidence of Auto-Tune, no heavy-handed attempts to sound hip and no screaming guitar solos.

Instead, 50 years after his first hits and closing in on his 82nd birthday, Humperdinck has created a heartfelt album anchored in archetypal orchestrations and honest, unspoiled performances of well-chosen songs.

Created as a message of love to his wife Patricia, who is suffering from Alzheimer’s disease, her muse has brought the best out of her husband of over 50 years. You won’t hear the vocal power or range of his heyday but Humperdinck can still transmit plenty of feeling without an ounce of schmaltz.

There are versions of contemporary hits like the Bruno Mars smash “Just the Way You Are’’ and Ed Sheeran’s “Photograph,’’ adapted to match Humperdinck’s natural style. “Just Like the First Time’’ seems to address his wife’s struggle head-on. AP