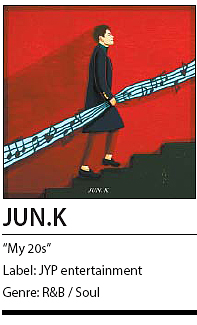 On Nov. 27, a member of the popular group 2PM, Jun. K, released his second solo album “My 20s,” which describes the singer reaching the end of his twenties - he turns 30 next year. The artist wrote the lyrics and music and produced all of the songs on this five-song album.

“A Moving Day” is the title track, inspired by the artist’s final day in a residence before moving out. As his belongings were removed, he saw the empty spaces and was reminded of his former lover.

He said he wanted to capture different moments from his twenties. To help remember the past, he browsed through his account on Cyworld - a popular Korean social media service in the 2000s - and read his own writing, which helped him to vividly depict certain emotions.

Artists featured on the album include some singers from the same entertainment agency including Park Ji-min from 15& and Jeon So-mi, a former member of I.O.I. Rapper Double K also participated on one track.