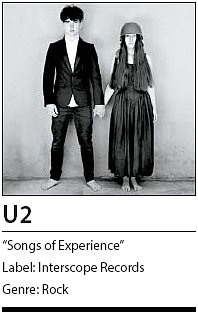 Like its 2014 predecessor, U2’s “Songs of Experience’’ is the product of a difficult and drawn-out recording process.

Much more so than “Songs of Innocence,’’ however, U2 has made an exciting, stage-ready album that doesn’t blush or blink in its use of the band’s signature sounds - The Edge’s chiming guitar, Adam Clayton’s trebly, adhesive bass, Larry Mullen Jr.’s sharp and responsive drums and Bono’s heart-on-his-vocal-cords singing.

“Songs of Experience’’ was supposed to be completed “soon enough’’ after “Songs of Innocence,’’ but things kept getting in its way.

Nearly every song has a different producer or combination thereof but they all seem to have been peeking at each other’s notes. The result is the best U2 album since “All That You Can’t Leave Behind.’’ It’s not so much a return to their roots as a modern expedition across their vast reservoir of sounds and themes. But when it comes to Bono’s offshore financial dealings and The Edge’s controversial plan for homes in Malibu, there may still be some “splainin’ to do.” AP