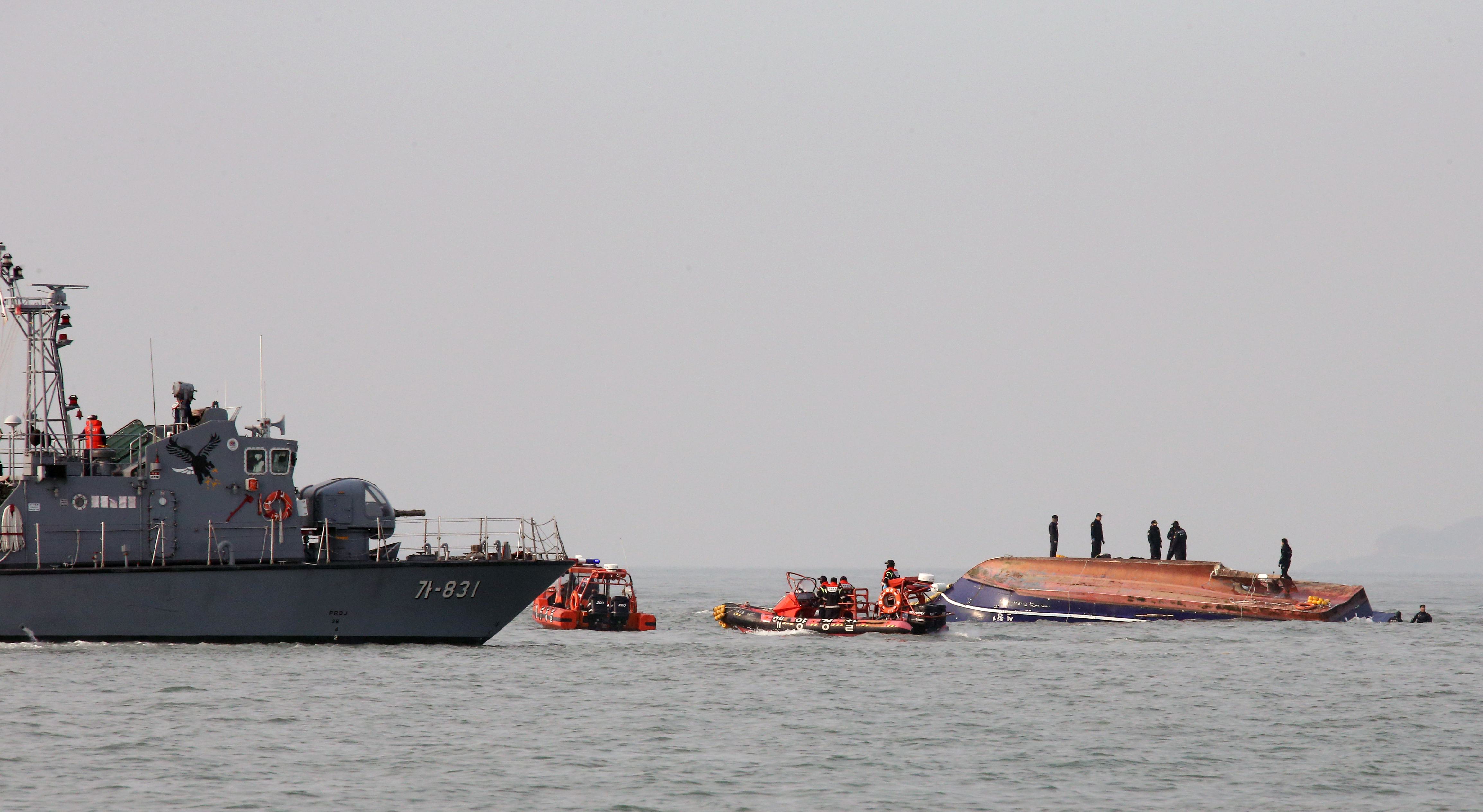 A fishing boat collided with an oil tanker in the waters off Incheon on Sunday morning, killing 13 people out of the 22 on the fishing boat.

Two people, including the 70-year-old captain of the fishing boat, surnamed Oh, are still missing as of press time Sunday.

“The fishing boat left Jindu Port of Yeongheung Island at 6 a.m. and collided with the oil tanker around 6:09 a.m. on the waters some 1 mile south of the bridge,” said a marine police officer in Incheon during a press briefing on Sunday morning. “It capsized as a result.”

All four people on the oil tanker were rescued.

The authorities had rescued 20 out of 22 people on the fishing boat but 13 of them died. Seven remain hospitalized.

The maritime police said they suspect the two vessels collided while trying to pass each other on the narrow waterway between the piers of Yeongheung Bridge.

President Moon Jae-in was informed by 7 a.m. of the accident, when he ordered the marine police, Navy and fishing boats nearby to do all they could to rescue the people overboard or stuck inside the capsized fishing boat.

On Sunday, marine police, Navy and fire fighters dispatched 39 vessels and eight aircrafts to search for the two missing.

Marine police said the first report on the accident came from one of the passengers on the fishing boat who called police when it collided with the oil tanker. Police got to the scene at 6:42 a.m.

Authorities said the fishing boat’s business was legally registered and that it had followed the normal legal procedures in setting sail on Sunday.

“We have confirmed that all people on board the fishing boat were wearing life vests when the boat set sail,” said a marine police officer. “But we suspect that those who died from the collision died because of injuries sustained during the collision or because the life vests came off the people for some reason.”

The Ministry of Oceans and Fisheries raised the danger level of vessel accidents to the highest level on Sunday after the collision and established a task force team to focus on vessel accident investigations and prevention.

The ministry said some 7 million people go fishing every year throughout the country, and accidents have been on the rise.

On Oct. 2, a fishing boat off the waters of Jeju Island capsized, killing one.

And on Oct. 3, a five-person family fishing off the waters of Jeju was rescued after their boat capsized. Two people, including a 4-year-old boy, died. None were wearing life vests.

Marine police said they found 35 cases of violations of the law in fishing in the Yellow Sea in October, five related to passengers not wearing life vests and four that concerned sailing while under the influence of the alcohol.

Throughout the country last year, there were 853 cases of violations of the law in fishing, the police said. Of them, 178 cases concerned passengers not wearing life vests and 115 concerned fishing in forbidden waters.

President Moon, from the Blue House on Sunday around 9:30 a.m., ordered everyone involved in the rescue operation to “reveal every process of the operation to the people through media so that everything remains clear to them.”

He also asked the authorities on Sunday morning to “do all they can to find the missing, because they may be wearing life vests and may be alive.”