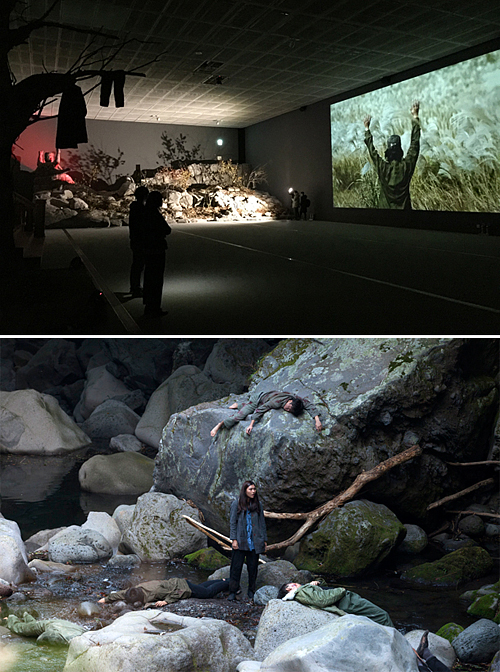 Artist and filmmaker Im Heung-soon has turned Gallery 5 of the MMCA Seoul, top, into a zone between the secular world and that of the dead. The museum is also screening his film “Things that Do Us Part,” a scene from which is shown above. [MOON SO-YOUNG, MMCA SEOUL]

Artist and filmmaker Im Heung-soon has transformed a gallery in the Seoul branch of the National Museum of Modern and Contemporary Art into a twilight zone “for the living to cross over to the world of the dead.” According to the museum, “the dead” refers to all the victims killed in Korea’s turbulent modern history.

Visitors to the gallery in central Seoul will first encounter the “Gate of the Four Heavenly Kings Statues” which sits under ominous red light, “dividing the secular world outside and the transitional world inside,” the museum explains. After passing through the gate and turning a corner of the mountain set, visitors enter a darkened space. 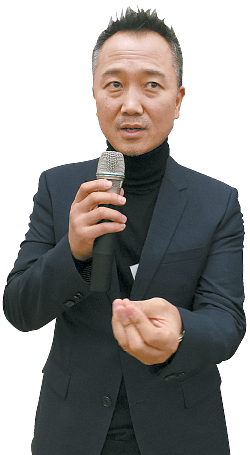 Along the walls of the wide Gallery 5 are installation works such as a boat and an old tree, from whose boughs are hanging men’s and women’s clothing, as well as the mountain.

One wouldn’t be mistaken if they thought all of the pieces in the gallery look like props from the set of a drama or a movie. Actually, most of the installation is made up of a set for a film that was shot in the gallery earlier this year. The movie, titled “Things that Do Us Part - Belief, Faith, Love, Betrayal, Hatred, Fear, Ghost,” is being displayed on a wide screen that completely fills one of the gallery’s walls.

All of these elements are part of Im’s solo exhibition, which is the fourth in the annual art project collaboration between the museum and auto giant Hyundai Motor to promote local artists in the middle of their careers. The exhibition’s title “Things that Do Us Part” is a question that drives the 48-year-old artist.

“I’ve always wondered what made us ideologically divided,” Im told press last week, pointing to modern Korean history, in which many people have been killed amid ideological conflicts, including the April 3 Jeju Uprising in 1948 and the 1950-53 Korean War.

The film tells the story of three women - Jeong Jeong-hwa (1900-91) who was an independence activist during Japanese colonial rule between 1910-45; Kim Dong-il (1932-2017) who was a left-wing activist during the Jeju Uprising and afterwards had to live in exile in Japan; and the 85-year-old Ko Gye-yeon, who was a communist partisan on Mount Jiri during the Korean War. The story is based on the many interviews Im had with the women or their families.

In his previous film “Factory Complex,” Im had already shown interest in listening to the voices of women who were of low economic status or ideological minorities, and who have been neglected in the male-dominated and success-oriented narrative of modern Korean history. 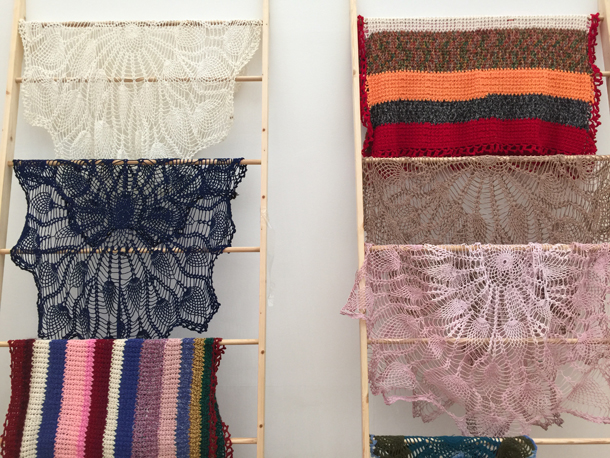 Knitted works by Kim Dong-il, who was a communist partisan on Mount Jiri during the 1950-53 Korean War and who later lived in exile in Japan. [MOON SO-YOUNG]

The feature-length documentary reviewing the harsh working conditions of female laborers in Korea during the rapid economic growth earned him the Silver Lion award at the 2015 Venice Biennale.

In the new film on view in the gallery, the interviews of the women and their families are juxtaposed with scenes of their lives reproduced by actors.

The scenes are symbolic, like visual poems or horror movies, which may remind viewers of Korean artist Park Chan-kyong, who is famous for exploring relations between musok, or Korean shamanism, and the country’s turbulent modern history. The interviews and the symbolic scenes are weaved together boldly and roughly.

The story of another woman, whom Im also interviewed, unfolds in a different film, titled “Reincarnation” (2015).

Lee Jeong-suk is a 73-year-old who has experienced at least three wars. She fled to the south during the Korean War when she was young. Then she lived through the 1960-75 Vietnam War, performing for Korean soldiers serving in the war. Later, she moved to the Iranian capital of Teheran after marrying an Iranian man, and lived through the Iran-Iraq War.

“Though these wars occurred in different eras in different places, the artist found connections in that they reveal the history of Asia, a region that fought against European and American imperialism but yet was ruled by them,” the museum pamphlet reads.

This idea is also clear in the film “Things that Do Us Part.” He seems to think that most problems of modern Korea and Asia originate from western Imperialism. It is up to viewers whether or not to agree with the opinion.

The exhibition focuses on the trauma of the violent modern history and how life goes on despite it.

In another gallery at the museum, the personal belongings of Kim Dong-il are carefully displayed, including clothes, books, dolls and decorative statuettes. They also include beautifully knitted goods, which were created by Kim herself.

“The knitted works show Kim’s aesthetics and her efforts to overcome trauma at the same time,” curator Kang Soo-jeong said. “Knitting is recommended for patients suffering from trauma. The trauma never goes away and keeps coming back to confront us, like a ghost.”