In defense of Song

In defense of Song 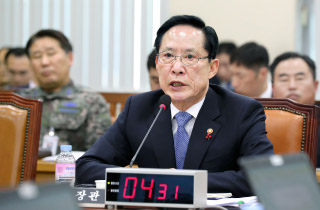 Defense Minister Song Young-moo answers questions from lawmakers at the National Assembly on Friday after North Korea’s launch of another missile. [LIM HYUN-DONG]

It would be an exaggeration to compare Defense Minister Song Young-moo to the 14th-century Korean admiral Yi Sun-sin, but their political environments are similar.

Song, who once served as head of the Korean Navy, is a renowned specialist in maritime warfare. Admiral Yi, who saw 23 victories in 23 battles, is remembered as a hero.

During his time, Yi faced endless interventions by King Seonjo and officials who had no knowledge of sea battles. The king and cabinet intervened in Yi’s operations with political judgments and in the name of national strategy, but their political judgments and strategy were often aimed at extending the reign of the ruling faction.

Yi refused to follow the court’s orders because he wanted to protect the soldiers and people. The king handed down the death penalty to Yi, though the admiral was eventually just purged. One of the lessons from the Japanese invasions of Korea in 1592 is that we must be watchful of the arrogance and ulterior motives of people who ignore a war specialist.

President Moon Jae-in’s aides are not experts in war, but they still denied the naval strategy of Minister Song and insulted him. On Friday, Song responded to a question at the National Assembly about a naval blockade on North Korea. “There was a discussion in the government that if the United States makes a request, we will not reject it and consider it,” Song said.

It was a direct attack on Song. The attack was based on strange logic, distorted facts and unwise remarks.

The Blue House official also distorted some facts. He said a naval blockade was not discussed within the government, but it was true that Song and Chung Eui-yong, the national security adviser, recently discussed a message posted by U.S. State Secretary Rex Tillerson on the department’s website shortly after the North’s provocation. It said the international community must take additional measures to enhance maritime security, including the right to interdict maritime traffic transporting goods to and from North Korea.

Tillerson singled out Canada, South Korea and Japan as partners. It is a fact that Song and Chung exchanged the view that if Tillerson makes such a request in the future, Seoul has to consider it positively. They discussed the possibility of maritime interdiction, a step that can lead to a naval blockade.

Finally, the Blue House official acted unwisely because he gave the impression that the administration disapproves of a naval blockade. That can invite misunderstanding that the presidential office is attempting to interfere with a military operation that did not even start with political reasoning. The Blue House went further later in the afternoon, making clear that Song’s response at the National Assembly was “his personal opinion.”

Under the Constitution, only the president and cabinet ministers have the power to run state affairs. Blue House aides do not have powers delegated by the people to run the country. They have no authority to single out a minister’s official remarks at the National Assembly as “his personal opinion.”

As the presidential aides went freely to insult the minister, speculation grew that it was the president’s intent. Now is the time for Moon to make things clear. If the defense minister, whose job is to prepare for war, cannot say that he will conduct a naval blockade against an enemy, we are not living in a normal country.

President Moon must make a choice. He must hold his aides accountable for going beyond their authority, or he must replace Minister Song.