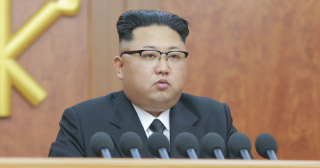 North Korea’s Chairman of the ruling Workers' Party Kim Jong-un declared the completion of nuclear weapons capability as he watched the launch of the new intercontinental ballistic missile (ICBM) Hwasong-15 at 2:48 A.M. on Nov. 29. Kim said in the New Year’s address this year that the ICBM test launch preparation was in its final stage. This year, North Korea fired 20 missiles in 15 tests, including three ICBM launches.

While a few technologies, such as atmospheric re-entry, are thought to be incomplete, North Korea claims that the Hwasong-15 launch was successful. It was celebrated with a festival and fireworks at Kim Il Sung Square in Pyongyang on Dec. 1. Kim must have wanted to boast that he had kept his promise.

Unlike his father, Kim Jong-un likes to constantly confirm the progress of the goal he set. While Kim Jong-il advocated grand slogans like “a powerful and prosperous nation” and set goals, he was not inspecting them constantly. We paid more attention to Kim Jong-un’s own voice than Kim Jong-il’s New Year’s addresses, which were published in the form of a joint editorial in the Rodong Sinmun, the People’s Army or the Youth League. The New Year’s Address is the window to Kim Jong-un’s thoughts as it includes the general policy direction and guideline for each field.

Next year’s address will be drafted based on reports submitted by agencies after this year’s projects are concluded and next year’s plans are established. It will be written by the Office of the Secretary and verified by the Propaganda and Agitation Department and the Organization and Guidance Department of the Workers’ Party before being reported to Kim Jong-un. Upon his approval, it will be finalized.

In the New Year’s address for 2018, Kim is expected to reemphasize completion of nuclear armaments and propose dialogue with the United States with conditions. Kim Yong-nam, the president of the Presidium of the Supreme People’s Assembly, told the visiting delegates of Russia’s State Duma last week it would sit down with the United States when its status as a nuclear state is acknowledged.

Vitaliy Pashin, a member of the Russian delegation, told the Interfax news agency that North Korea considers launching the Hwasong-15 a sign to the United States that it is ready for negotiation. The negotiation with the United States is not likely to be smooth, as sanctions on North Korea are intensifying and the Trump administration is troubled with the Russia scandal.

The New Year’s address is expected to contain remarks against the sanctions, as well. North Korea may suffer more when the Hwasong-15 launch leads to additional sanctions. Kim Young-nam told the Russian delegation that North Korea can survive 100 more years under sanctions. But with a possible naval blockade, complaints could increase.

In March 2013, Kim Jong-un proposed the parallel pursuit of economic development and nuclear armament. As the nuclear armament he proclaimed in this year’s address is complete, next year’s address should contain North Korea’s pursuit of economic development. Kim needs to show the North Korean people that he is keeping the promise he made four years ago.