Health and beauty stores are rapidly expanding their footprint in Korea as the sector remains one of few lucrative realms in the local retail industry.

CJ Olive Networks will soon open its 1,000th Olive Young store 18 years after starting the business. This year alone, it has added more than 200 locations. GS Retail in February took full ownership of Watsons Korea, the local operation of the Hong Kong franchise, and significantly expanded the chain. Lotte Shopping is also picking up the pace with LOHB’s, which had 30 stores in 2014 and now runs 89 locations across the country.

Health and beauty stores, sometimes shortened to H&B, are similar to drugstores like CVS and Walgreens in the United States, but Korean law forbids them from selling pharmaceutical products, even off-the-counter medicine, so businesses naturally shifted to cosmetics and body care products, including dietary supplements.

The H&B market has seen average annual growth of 22.5 percent in the last five years and is forecast to reach 2 trillion won ($1.8 billion) this year. For retail conglomerates like CJ, GS and Lotte, the figures suggest the market is mature enough to ensure steady revenue as they look for the next big thing to make up for falling sales at discount chains and department stores. 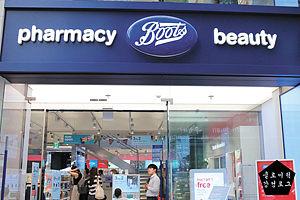 The companies are competing fiercely to expand their presence. Late entrants in particular are boosting efforts to catch up to the market leader Olive Young.

Even smaller cosmetics brands that operate their own small shops and discount retail operators are eyeing a leap into the market.

Olive Young’s parent company, CJ Olive Networks, is expected to pull in sales of 2 trillion won and operating profit of 111 billion won this year, according to industry estimates. The figures would represent an increase of 32 percent and 18 percent from last year.

It is a remarkable turnaround from 2009, when CJ acquired a full stake in Olive Young from a Hong Kong retail group. For the next few years, the H&B chain remained profitless, with loss surpassing 10 billion won.

But demographic changes - a rise in the number of single-person households and growth of a young population in their 20s and 30s - reversed the situation, and now, Olive Young is CJ Group’s fastest-growing subsidiary.

About 80 percent of this year’s revenue at CJ Olive Networks, which also runs a home shopping channel, is expected to come from Olive Young. H&B stores also benefited from a new law in 2011 that allowed retailers other than pharmacies to sell sanitary pads and other women’s health care products. H&B stores began selling the products, and the market began growing at a remarkable speed, from 300 billion won in 2011 to 1.3 trillion won last year.

Another attribute cited by analysts for H&B stores’ success is the carefree shopping atmosphere. Customers can freely try on products like lipstick and makeup without being followed by staff, a strategy that has worked well with younger consumers who value cost and saving money.

With the market proving its worth, conglomerates are now making aggressive moves to include or expand H&B stores in their business portfolio. The market’s No. 2 player, Watsons, entered relatively early in 2005 but failed to make leaps due to a conservative business strategy.

But after fully acquiring Watsons Korea, GS Retail has been signing off large investments to boost the sector despite going through some struggles with its convenience store chain GS25. The company said it is looking for ways to create synergy between GS25 and Watsons. Lotte Shopping is also looking for ways to expand LOHB’s, which started in 2013 with 10 stores.

The first few years were slow, without impressive results, but last year, Lotte began investing heavily in the chain, setting up more than 30 new stores and doubling its sales. LOHB’s now has 89 locations, closely tailing Watsons’ 139.

“Until now, LOHB’s didn’t receive much attention, squished between Lotte Department Store and Lotte Mart [both under Lotte Shopping], but we’re planning to develop it into one of our major businesses,” a source at Lotte Shopping said. The company plans to have more than 100 stores by the end of this year.

Shinsegae last year won the right to operate the British drugstore chain Boots in Korea as part of its bid to enter the H&B market. The company opened four Boots stores this year, including one in the Starfield Hanam mall in Gyeonggi and a four-floor location in Myeong-dong, central Seoul, just steps away from Olive Young.

The Myeong-dong store is the largest H&B in Korea, measuring 1,284 square meters (13,820 square feet). The company said its strategy is to customize each store and its product categories based on the commercial area in which it is located.

Standalone cosmetics shops are also adding products to their offerings to turn themselves into H&B stores.

Aritaum, which is owned by cosmetics maker AmorePacific and has 1,340 stores nationwide and 300 in Seoul alone, recently added skin care supplements to its product lineup.

The company said the “rapid transition is hard because more than 80 percent of the branches are franchises,” but industry analysts believe this may be a sign that Aritaum is looking to profit from the H&B market.

Convenience stores have also started signing partnerships with cosmetics and skin care product manufacturers to sell at their own operations.