Samsung’s latest spin is film about a washer

Samsung’s latest spin is film about a washer 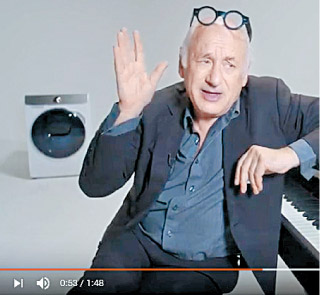 Michael Nyman, composer of the score for “Washing Machine,” talks about the process of writing for the film. [Screen capture]

The slow-cinema feature, titled “Washing Machine,” runs 66 minutes and captures the whole wash-and-rinse cycle of a Samsung washer in a single shot. A minimalist piano score by Michael Nyman, best known for his work on the Oscar-winning 1993 film “The Piano,” will accompany the piece.

“The repetitive motion of the spinning drum is melodically represented through Nyman’s masterful playing,” Samsung said in a statement, “with thematic ideas developing as the wash progresses.”

The drawn-out advertisement features one of Samsung’s latest QuickDrive machines, which the company says can reduce wash time by half without sacrificing performance, cleaning a single red sock.

Samsung U.K. and Ireland, which came up with the idea of promoting the washer through the film, said it was inspired by its own research that revealed British adults will spend an average 1,481 hours, or 61 days, watching their laundry tumble in a machine over a lifetime.

“What better way to showcase the fastest washing machine we have ever made than to feature it in one of the slowest movies ever created,” said Mark Seaman, head of domestic appliances at Samsung U.K. and Ireland, “complete with a soundtrack from one of Britain’s most celebrated composers.”

“The idea of this intrigued me when I was approached,” Nyman said, “putting a score to something so visually repetitive and prosaic. As a film composer, you are frequently taking a cue from the drama on screen or interpreting it sonically, but here the challenge was to offset the mundanity and also enhance the hypnotic appeal.”

The world premiere of “Washing Machine” is scheduled to take place at the Leicester Square Cineworld in central London today, and the film will be made available for free on YouTube starting Wednesday.