Samsung’s next Galaxy may not be folding phone after all

Samsung’s next Galaxy may not be folding phone after all 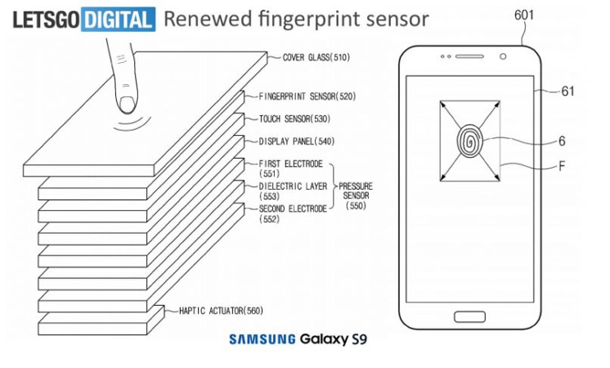 A patent application for a fingerprint sensor submitted by Samsung to the World Intellectual Property Organization. [LetsGoDigital]

Now that the hype over Samsung’s Galaxy Note8 and Apple’s iPhone 8 and 10th-anniversary X is petering out, early adopters and phone fanatics are already turning their attention to the next release.

In particular, rumors are swirling about when the S9 and S9 Plus might come out and what technological innovations Samsung might deploy in the new Galaxy phones.

Some are predicting an earlier debut than this year, perhaps at the Mobile World Congress in Barcelona scheduled for Feb. 25 to March 1.

But Samsung hasn’t used the annual tech show to showcase its new phone since 2016, when it came up with the S7. For the S8 this year, the tech giant chose to throw an independent unpacked event in New York and London.

If Samsung opts for an unpacked event for the S9, it will most likely be set sometime in March, given this year’s precedent.

A Samsung spokesman, though, was skeptical about a release before March, citing a tight schedule for development, despite rumors the company has already begun churning out the S9.

As for the design, the big question has been whether the S9 will be foldable. The odds so far point to no.

Samsung hinted in September that it was preparing to launch a foldable phone in 2018 with two separate OLED displays in a flip phone design.

“A foldable phone is part of our road map, and we have set a goal to release it next year,” Koh Dong-jin, president of the mobile communications division at Samsung Electronics, said in a press conference on Sept. 12.

Foldable phones require developing various related parts, Koh said, and the company is in the middle of “digging” itself out of those hurdles to release the phone only after the problems have been solved completely.

A month earlier in August, when Samsung unveiled the Galaxy Note8, Koh also said foldable phones were something Samsung “definitely wants to challenge,” but the company needs more time to hone the technology.

Analysts expect that if Samsung follows the “road map,” the Galaxy Note9, which based on precedent could come in August next year, might adopt the folding feature.

Or, as Apple did with the iPhone X, Samsung could opt for the simultaneous release of a foldable model and call it the Galaxy X, analysts said.

Samsung might not be the only manufacturer developing a folding smartphone for release next year. A new patent from Apple hints Samsung’s biggest rival might be working on it, too.

The latest patent describes a device that resembles a book that can transform into a small tablet. Its application to the United States Patent and Trademark Office shows the gadget “may have a flexible portion that allows the device to be folded.”

Evan Blass, a frequent source of phone leaks, said in a recent tweet that Samsung is not planning a big redesign for its Galaxy S9 and will instead deliver “only a minor update” in the form of a better processor and better placement of its fingerprint sensor.

Samsung is rumored to be working on an optical fingerprint sensor hidden underneath the display after consumers expressed ergonomic frustration about the fingerprint sensor located next to the camera on the back of the S8 and Note8.

Some have dubbed the placement the worst feature of the new Galaxy lineup.

The S9 will not likely come with 3-D face scanning technology like the one its rival Apple has implemented in the iPhone X, according to recent leaks. The headphone jack will probably remain, and leaks suggest the phone will come with dual cameras, a narrower bezel and new colors.