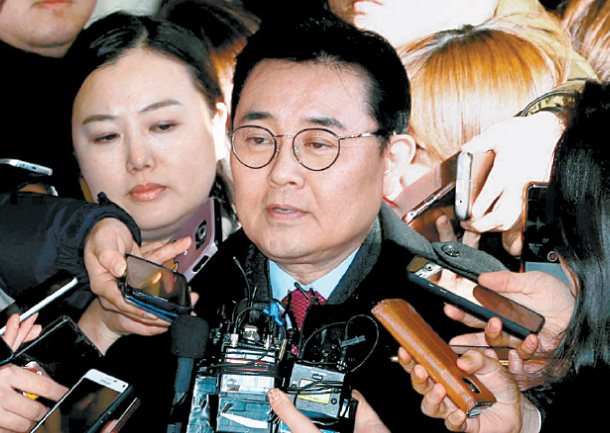 A former senior secretary to President Moon Jae-in flatly rejected bribery suspicions against him Monday as he appeared at a local prosecutors’ office for questioning for the second time in less than two weeks.

“This has nothing to do with me and I know nothing about this,” Jun Byung-hun, former senior presidential secretary for political affairs, told reporters after arriving at the Seoul Central District Prosecutors’ Office for questioning.

Jun is accused of forcing Lotte Homeshopping, a local home shopping channel, to donate 330 million won ($303,700) in 2015 to the Korea e-Sports Association, of which he was then the chief.

Prosecutors suspect the money was given in exchange for favors involving the renewal of Lotte Homeshopping’s broadcasting license. Jun was at the time a three-term lawmaker belonging to the parliamentary committee in charge of related policies.

Prosecutors are also looking into suspicions that Jun forced another home shopping channel, GS Home Shopping, to make a donation. The company donated 150 million won to the Korea e-Sports Association in 2013. Jun has denied the charges against him.

Last week, prosecutors sought a court warrant to formally arrest Jun, but the court rejected the request, saying that the charges against him are disputable and that he has a low risk of fleeing or destroying evidence. After Monday’s questioning, prosecutors plan to determine whether to seek an arrest warrant for him again.