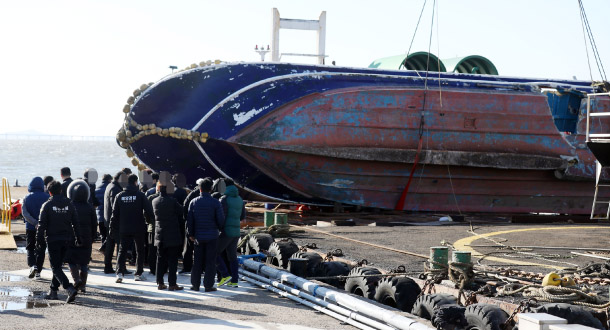 Relatives of the 13 people who died in the collision between a fishing boat and an oil tanker in waters off Incheon examine the fishing boat on Monday after it was towed to a port in Jung District, Incheon. [YONHAP]

Authorities arrested the captain of the oil tanker that collided with a fishing boat on Sunday and killed 13, charging him with accidental homicide after he told police he “saw the fishing boat before the collision” and thought it would “get out of the way on its own.”

The collision took place in waters off Incheon around 6:09 a.m. Sunday, capsizing the 9.77-ton fishing boat and killing 13 out of the 22 people onboard. All people on the 336-ton oil tanker survived.

“I saw the boat before the collision,” the captain, a 37-year-old surnamed Jeon, reportedly told police. “I thought it would get out of the way on its own.” He added, “I admit that I made a mistake. I am sorry to the victims and their relatives.”

A hearing for a detention warrant on the two will be held today.

The captain of the fishing boat, a 70-year-old surnamed Oh, and a 57-year-old man surnamed Lee who was on the boat were still missing as of press time Monday.

Authorities have not yet specified which vessel may be more responsible for the collision.

“It seems like the two vessels collided while tying to pass the narrow waterway south of Jindu Port, which measures some 0.2 miles wide,” said a marine police officer. “We think that the captain of the oil tanker knew that the fishing boat was sailing quite close to it but did not take appropriate precautions in sailing safely.”

“Just by looking at the photos of the vessels, it looks to me like the prow of the oil tanker collided with the port-side stern of the fishing boat,” said Gong Gil-young, professor of navigation science at Korea Maritime and Ocean University in Busan. “I think both vessels made a mistake.”

The fishing boat was towed to land on Monday morning. Authorities began investigating the boat to determine the cause of the collision. The relatives of the victims who want to take part in the investigations have been allowed to be at the site with the investigators.

The timing of the rescue operation has raised some suspicion over whether authorities got to the scene as soon as they could. The accident took place at 6:09 a.m., marine police said. A high-speed boat full of police got to the scene in some 30 minutes, but it was not carrying any divers to rescue people inside the capsized boat.

The marine police rescue team from Incheon, including divers, got to the scene some 1.5 hours after the collision. The team had two high-speed boats but one of them was out of service and another without a radar system, which made it impossible to sail in the dark.

The team had to drive on the road some 50 kilometers (31 miles) to the closest port to the accident site and get on a private boat to reach the site.

Inside the boat, the team found 14 people. Of these, 11 were dead. The three who survived did so by relying on air pockets inside the capsized boat, police said.

The team found two more dead in the water.

“We requested on Wednesday autopsy tests on the bodies to find out their exact causes of death,” said a marine police officer in a press briefing on Monday.