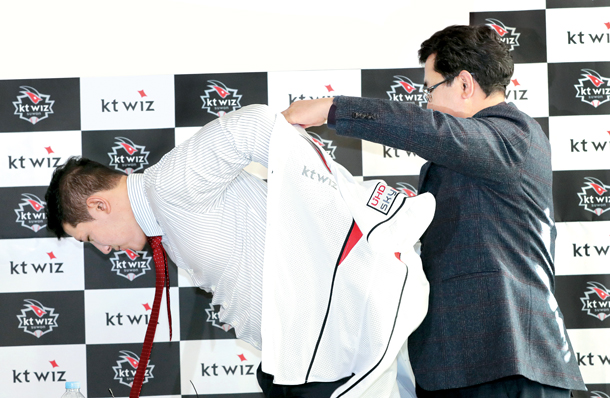 Within four years, from 2013 to 2017, the investment Korea Baseball Organization (KBO) clubs have made in the free agent market has increased significantly, from 24.25 billion to 76.62 billion won.

Last year, the KBO permitted contracts over the 10 billion won threshold. Lee Dae-ho of the Giants is currently the highest FA earner at 15 billion won. The Giants were willing to pay the high price for Lee as he is a fan favorite with major-league experience.

Following Lee, Choi Hyoung-woo of the Kia Tigers is second at 10 billion won and Son Ah-seop, who chose to stay with the Giants, is third at 9.8 billion. 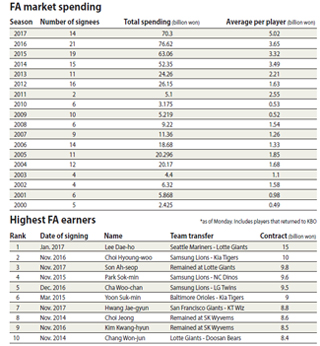 In four years, the highest FA earners have changed completely. If Kim Hyun-soo decides to return to the KBO this year, it’s likely that he will break the record. Due to the high investments the clubs have been making in recruiting major league returnees or top players in the KBO, the record is now routinely broken every single season.

When the free agent system was introduced to the KBO in 2000, only 2.425 billion won was spent on the five initial signees. At the time, there was no such thing as a four-year contract that guaranteed a player’s loyalty for a certain period of time.

“The signing of top players is like one third to one fourth of the club’s yearly operating expenses,” said an industry source familiar to the matter. “If the market continues to be overheated for the next few years, then it’ll give financial difficulties to the clubs.”

Despite the concerns, the FA market has only gotten bigger. Since the clubs are only judged based on results, they try their hardest to bring in the best players, even though they are aware that prices are shooting up.

“It’s difficult to bring a player without overpaying,” said an industry source familiar with the matter. “The actual evaluation price and the recruiting price are different. If a club is certain about their goal of rebuilding, like the World Series Champion Houston Astros, who lost 100 games a season for three consecutive years, then they need to go along with it. But in the domestic league, this can have a negative affect on the companies that sponsor the clubs. This is why it’s difficult to rebuild a team.”

Not only that, clubs feel like they have no choice but to pay the price for top players for fear of fans turning against them. But the amount of spending isn’t the only concern. More and more veteran players are left out of the market, as clubs don’t have enough to spend on them after blowing it all on a few top players.

This has proven to be true this year, as none of the clubs have announced the signing of any of the more seasoned FA players.