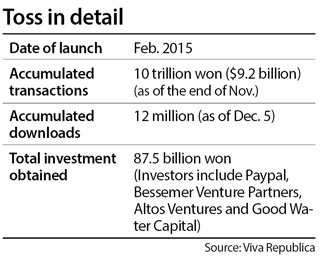 After emerging as one of the top fintech start-ups in Korea, Viva Republica, the company behind Korea’s top peer-to-peer transfer app Toss, is zeroing in on Southeast Asia as its next target market.

“Right now, we are very interested in the Southeast Asian market,” said Lee Seung-gun, the CEO of Viva Republica, during the company’s first press conference on Tuesday at its office in Gangnam, southern Seoul. “While more than 70 percent of the population is using smartphones, their financial services are equivalent to that of Korea in the 1980’s. Our goal is to bring our story and product to Southeast Asian countries such as the Philippines and Vietnam and to improve the level of financial services in the market.”

Viva Republica’s decision to tackle the markets outside of Korea comes after Toss has proven very successful domestically.

As of November this year, the accumulated transactions through Toss reached 10 trillion won ($9.2 billion). In November alone, the platform handled more than one trillion won, a feat that comes just two and half a years since it launched in February 2015. The company said its annual sales will come to 20 billion won by the end of this year and reach the break-even point sometime next year.

Its growth has also been recognized globally.

In November, the company was ranked 35th in the 2017 Fintech 100, a list made by fintech investment firm H2 Ventures and global consulting firm KPMG. “Before Toss, users required five passwords and around 37 clicks to transfer $10,” said the report by H2 Ventures and KPMB released on Nov. 15. “With Toss, users need just 1 password and three steps to transfer up to 500,000 won ($430).”

The recognition comes shortly after the company sealed investment worth $48 million from a group of Silicon Valley investors that included American e-payment giant PayPal.

“Our goal is to start service in Southeast Asia sometime next year,” said Lee.

But before its global expansion, the company feels like it still has more to achieve in the domestic market.

The CEO said during the press conference that Toss hopes to become a financial service company that provides a comprehensive service to its users, connecting them to different products sold by financial institutions such as banks and insurance companies.

“A financial service company’s role is not to come up with investment products or issue loans directly to consumers but to compare and recommend different products in the market to end users as a neutral agent,” said Lee. “While the market has grown substantially in advanced countries such as the United States, Korea is yet to see any notable growth in the field and we would like to provide local consumers with such services.”

While starting out as a simple peer-to-peer money transfer service, Toss users can now even invest in real estate products through the app as it connects to the peer-to-peer lending service by Tera Funding, one of the leading peer-to-peer real-estate investment firms in Korea. They can also check their credit scores for free through Toss, not to mention the bitcoin transaction service offered through a partnership with Korbit, one of the top cryptocurrency exchanges in Korea.

Lee, who is also chairman of the Korea Fintech Industry Association, told the Korea JoongAng Daily that most Korean fintech companies have overseas markets in mind but they are often hampered by regulations.

“Korean regulations on financial services are very different from other countries,” said Lee. “A service developed to meet the regulatory framework in Korea cannot be used overseas, leaving fintech companies to work twice as hard when they want to expand their service to outside the country.”