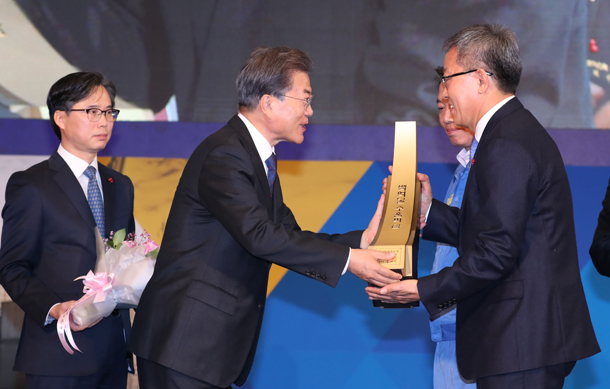 The government recognized 1,153 companies and 680 individuals for their contributions to the country’s exports during its 54th annual Trade Day event at the COEX convention center in southern Seoul on Tuesday.

In the first nine months of this year, exports grew by 18.5 percent year on year, the largest rate in six years. Thanks to the increase, Korea is expected to exceed $1 trillion in trade volume for the first time in three years.

With current projections, the Korea International Trade Association expects Korea to be the sixth-largest exporter in the world by the end of this year. Last year, it was eighth.

Posco earned the top Trade Day award for achieving more than $10 billion in exports in the 12 months between July 2016 and June 2017.

Last year, no company was recognized for exceeding $10 billion in exports for the first time in 14 years.

Yura Corporation, a manufacturer of car parts, was awarded the $1 billion award, while BASF Korea was recognized for exports worth $900 million and tobacco company KT&G for $800 million.

Among smaller companies, Kakao Games was recognized for exceeding $30 million in exports.

Although the company was founded last year, it reached high figures by establishing operations in Europe and the United States and offering diverse games through mobile and PC platforms.

“Despite political turmoil, consecutive threats from North Korea and protectionist trade policies, our nation has done well,” President Moon said during the event on Tuesday, adding that the government “will support more small and midsize companies to actively engage in exports.”