Dancers perform ogomu, a traditional dance involving drums, during the opening ceremony of the 12th Session of the Unesco Intergovernmental Committee for the Safeguarding of the Intangible Cultural Heritage on Dec. 3, at the International Convention Center in Jeju. [YONHAP]

SEOGWIPO, Jeju - Last December, during the annual meeting of the Intergovernmental Committee for the Safeguarding of the Intangible Cultural Heritage held in Ethiopia, Korea’s culture of haenyeo, the female divers indigenous to the island of Jeju, was inscribed on the Unesco’s list of Intangible Cultural Heritage of Humanity, making it the 19th item Korea has on the list. Because the committee limits countries like Korea who already have a high number of items on the list to only apply with one entry every two years, there’s no potential cultural heritage of Korea on the table this year.

Instead, the country became the host of this year’s Unesco Intergovernmental Committee for Safeguarding of the Intangible Cultural Heritage, bringing some 1,000 people from around the world to Jeju - which itself is listed as part of Unesco’s World Heritage. With an opening ceremony held on Dec. 3, the six-day meeting kicked off at the International Convention Center (ICC) Jeju in Seogwipo. 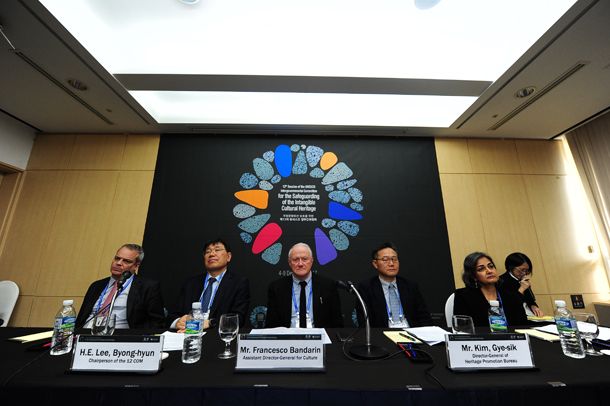 Leaders of the Unesco’s Intergovernmental Committee present at a press briefing held on Dec. 4, at the ICC Jeju. In the center is Francesco Bandarin, the Assistant Director-General for Culture at Unesco. [CULTURAL HERITAGE ADMINISTRATION]

“We are on the island of Jeju, home to the female divers who [were honored last year by this organization,]” said Francesco Bandarin, the committee’s Assistant Director-General for Culture. “This example shows that you have the best case of what is intangible heritage - something that is interconnected to tradition and the community. As you know, this convention was created 10 years ago, to complement and honor this kind of heritage.”

Up for discussion this year are six requests for inscription on the List of Intangible Cultural Heritage in Need of Urgent Safeguarding, including items like the Whistled language of Turkey and Taskaiwin and a martial arts dance native to the western High Atlas submitted by Morocco, along with 34 requests submitted to the Representative List of the Intangible Cultural Heritage of Humanity, which includes the Art of Neapolitan “Pizzaiuolo,” and the Basel Carnival of Switzerland, among others. According to the committee, the decision will be announced within this week.

Deciding what items to add to the list is only a portion of what the committee, composed of representatives of 24 countries, does during the annual meeting. This year’s agenda, according to Bandarin, includes various topics such as intangible cultural heritage situations of emergency, the impact of the Convention and the use of resources from the Intangible Cultural Heritage Fund.

It has been more than a decade since the Convention was drawn up to raise awareness about safeguarding intangible cultural heritage from around the world, and Tim Curtis, Secretary of the 2003 Convention, says he gives the impact of the Convention over the past 15 years “a good grade.”

“The fact that 175 countries have ratified this convention in record time, I think testifies to a few things - the success of the convention and how it’s done, but also it testifies that it speaks to something important,” said Curtis.

Meanwhile, Lee Byong-hyun, chairperson of this year’s committee, and Bandarin stressed that they are going to push the member states to take responsibility and “pay their dues” as the committee has lost a quarter of its budget. 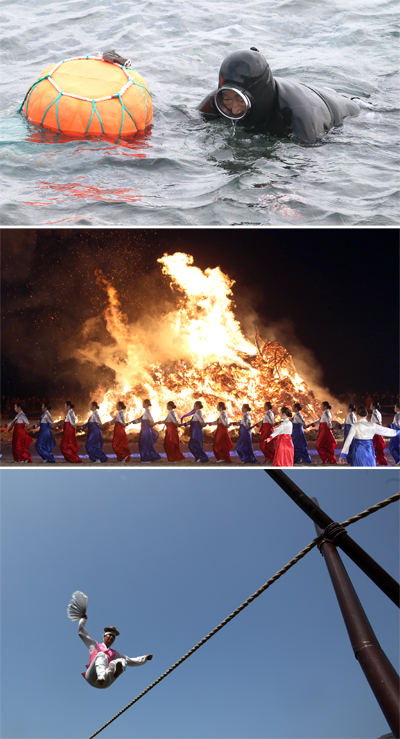 Korea has 19 items on the Unesco’s list of Intangible Cultural Heritage of Humanity, including, from top, haenyeo, or female divers indigenous to the island of Jeju, which was inscribed last year; the traditional dance ganggangsullae; and jultagi, or tightrope walking. [YONHAP]

However, regarding the questions raised about Unesco’s decision to not add the documents of Japan’s wartime sexual slaves, or the “comfort women,” to its Memory of the World list announced late October - which Korean civic groups criticized Unesco for, claiming that they had given into pressure from Japan, who allegedly threatened that it would not pay its dues to Unesco - Lee insisted that although Unesco is under a tight budget, it will not make unethical decisions.

Jyoti Hosagrahar, director of the Creativity Culture Sector, also stressed that the “spirit of this convention is not about choosing one cultural element over another or saying one is more important than the other,” but about “celebrating cultural diversity.”

“It’s really important to note the difference between this convention to the different conventions and mechanisms under Unesco,” she added.

“The intangible heritage convention, in particular, is not related to any boundary as such. It is not about ownership over an element. So even if one country puts forward an element, it does not mean that the element is owned by that country. It is simply a way that a country or community in that country has put it forward. We have many elements on the list that are put forward by several countries together.”