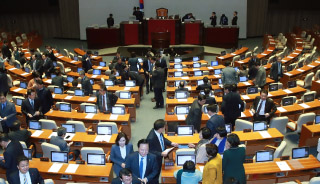 Lawmakers leave the main conference hall of the National Assembly after a plenary session was adjourned on Tuesday. [YONHAP]

Last-minute wrangling continued in the National Assembly on Tuesday over the passage of the Moon Jae-in administration’s budget for next year as the main opposition party walked away from an earlier compromise.

Following a Monday agreement reached by floor leaders of the three main parties - the ruling Democratic Party and opposition Liberty Korea Party (LKP) and People’s Party - the National Assembly scheduled a vote Tuesday to pass the budget bill. A plenary session opened at 11:59 a.m. but adjourned two minutes later because of the absence of lawmakers from the largest opposition party, the LKP.

“We do have a quorum because lawmakers from other parties are here,” National Assembly Speaker Chung Sye-kyun said. “But the LKP is still holding a lawmakers’ general assembly to decide its position on the budget and relevant bills and rewriting of the budget bill is also not complete.”

“It is the floor leaders’ agreement to wait for them,” Chung said. “So the session will be adjourned and reopened when everything is ready.”

“The lawmakers said they cannot accept the agreement,” Rep. Chung Woo-taik, floor leader of the LKP, said after a three-hour meeting. “The contentious points are the plan to increase the number of civil servants and the corporate tax hike.”

On Monday, the three parties agreed that the budget will include money earmarked for Moon’s signature projects. The ruling and opposition parties agreed Monday to allow the government to hire 9,475 new civil servants next year, down from 120,000 in the initial plan. The agreement made clear that the LKP deferred a decision on the compromise.

The agreement also included a compromise on the corporate tax hike. It said the corporate tax rate for a company with a taxable profit of over 300 billion won ($276 million) would be 25 percent, up from the current 22 percent. Initially, the government wanted to apply the new rate for the companies with incomes higher than 200 billion won. The LKP had also noted that it did not support the change.

As a result, the LKP decided to oppose the budget bill. It remains to be seen if the lawmakers will boycott the voting session altogether or attend the session and vote against it.

The conservative opposition Bareun Party also decided to oppose the budget proposal. The Justice Party was also unhappy, complaining that welfare budgets were slashed in the compromise.

The ruling Democratic Party does not have a majority to pass the budget. In the 298-member National Assembly, it controls 121 seats, requiring cooperation with opposition lawmakers to pass any bill.

To pass the budget, People’s Party’s cooperation is crucial because the LKP, which has 116 lawmakers, made clear its opposition. The People’s Party originally controlled 40 seats, which was reduced to 39 on Tuesday as one lawmakers lost his seat for an illegal election campaign. The party is in favor of the budget bill.

Sources at the National Assembly said the voting session would resume at 9 p.m., beyond press time. The Democratic Party and the People’s Party decided to hold general assemblies of lawmakers to make sure their representatives were present to make a quorum.