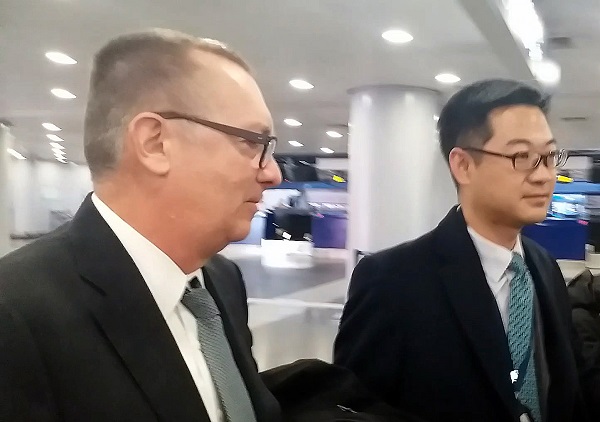 Jeffrey Feltman, the United Nations’ undersecretary general for political affairs, was scheduled to arrive in Pyongyang today and departed on North Korea’s Air Koryo from the North Korea earlier in the day. He is the most senior official to visit the country in six years, and his role as a possible intermediary at a time of escalated tensions with the North is expected to be observed closely.

He will also meet with members of the diplomatic corps in North Korea and visit UN projects during the visit, which runs through Friday.
North Korea extended an invitation to the United Nations in September to send a visitor for a "policy dialogue.”

Feltman was in Beijing prior to heading to Pyongyang and met with Chinese Vice Foreign Minister Li Baodong on Monday.
There is especially interest to see if Feltman could help bring North Korea back to the negotiating table or arrange a visit by UN Secretary General Antonio Guterres to the country.

If such a visit by Guterres comes about, it would be the first by a UN chief to North Korea in over two decades.
Former UN Secretary General Ban Ki-moon, a former South Korean foreign minister, had planned to visit the Kaesong industrial complex in North Korea in May 2015, but Pyongyang retracted its approval for the trip at the last minute. Kaesong, which was the last economic cooperation project between the two Koreas, was shut down by Seoul in February 2016, following North Korea’s nuclear test the month before and the launch of a long-range ballistic missile.

The last UN chief to visit North Korea was Boutros Boutros-Ghali in 1993. The only other UN secretary general to visit Pyongyang was Kurt Waldheim, who went in both 1979 and 1981. Both met with North Korean founder Kim Il Sung.

UN Spokesman Dujarric did not elaborate on whether Feltman would propose a possible trip by the secretary general to Pyongyang and only pointed out that Guterres has repeatedly said “his good offices are always available” if involved parties want it.

Washington officials, including U.S. Ambassador to the UN Nikki Haley, have said that the North’s launch of an ICBM on Nov. 29, which the regime said is a new Hwasong-15 missile that puts the entire U.S. mainland in its range, brings it closer to war with Pyongyang.
Feltman’s visit coincides with large combined aerial exercises by the U.S. and South Korean militaries, dubbed Vigilant Ace, involving more than 230 warplanes, including stealth fighters such as F-22 Raptors and F-35As, and around 12,000 personnel.

The piece did not specify whether Bolton was on an official mission or not.
Seddon wrote, “Such is the severity of the situation that now may be the time for China to take the initiative, and call on the UN secretary-general, António Guterres, to use his good offices, and those of his predecessors Ban Ki-moon and Kofi Annan, to pull both sides back from the brink and preside over UN-sponsored talks.”

“We hope an opportunity for North Korea to come to a path of dialogue with the international community with be created,” a South Korean Ministry of Unification official told reporters in Seoul. “We are aware that the UN secretary general [Guterres] has expressed numerous times interest in playing an intermediary role on the North Korea nuclear issue,”

He was part of a Russian delegation of lawmakers who met with Kim Yong-nam, president of North Korea’s Presidium of the Supreme People's Assembly, in a five-day visit to Pyongyang last week.

But Katina Adams, a spokeswoman for the U.S. State Department's Bureau of East Asian and Pacific Affairs, told the Voice of America Monday, that “it is not enough” for North Korea to “stop its program where it is today,” and that it has to be prepared to come to the table ready to “cease and roll back” its weapons program.