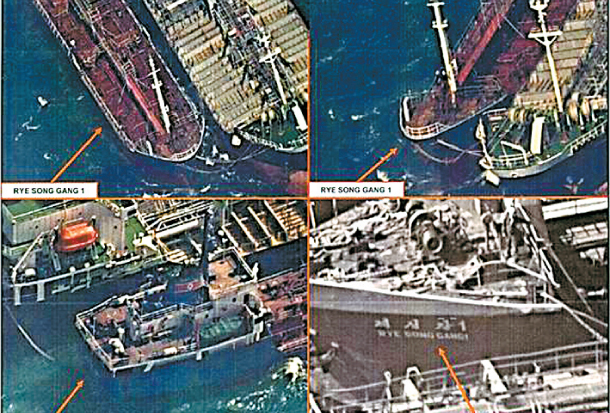 North Korea is known to employ illicit shipping practices to evade United Nations Security Council sanctions, as in the case above, when a vessel conducted a ship-to-ship transfer, possibly of oil, on Sept. 11. [YONHAP]

Take additional measures to enhance maritime sanctions, he told foreign countries in a statement, including the right to interdict sea traffic transporting goods to and from the regime. The call was a grim acknowledgement that current sanctions are not working. The United Nations Security Council had agreed in March 2016, following the North’s nuclear test that January, that all countries shall inspect cargo transitioning through their territory if it is destined for or originates from North Korea, for the purpose of ensuring no banned items get in or out.

A critical loophole of resolution 2270 was that the inspection could be overridden if the trade served “humanitarian” purposes and did not generate revenue for the North’s missile and nuclear development program.

Last August, the UN Security Council banned all exports of North Korean seafood in response to two ICBM tests in July - but by then, Pyongyang had learned how to circumvent the rules.

Some North Korean fishermen have fared well as a result of the seafood ban, said Lee Sang-sook, a research professor at the Korea National Diplomatic Academy, because they disguise the origin of their goods and sell them in northeast China, where the cost of seafood has risen due to an overall fall in supply.

“I heard North Koreans freeze their catch to sell them off when China loosens inspections every now and then,” said Lee.

One way North Korea manages to get their sea products out of the country, according to experts with knowledge of the process, is through Chinese vessels, which switch off their transponder, a navigation device used to signal distress, when they enter the North and return with the goods.

Another common method is transshipment, whereby a North Korean vessel docks at a bonded area in China, transferring its seafood to third-country vessels. Chun Yung-woo, chairman of the Korean Peninsula Future Forum, pointed out that if the ships are disguised they can easily arrive at Busan Port or Incheon Port, possibly bringing with them materials prohibited under UN resolutions, “even weapons that can attack us.”

A report from a panel of UN experts last September said that North Korea falsified the identity and documentation of its vessels to evade sanctions, mentioning eight vessels belonging to the North’s Ocean Maritime Management Company that were found to have done so. Eighteen out of 21 vessels from the company banned from international voyage were designated “domestic fleet,” according to the report, which is an “unusual arrangement given that the country’s ports straddle two coasts, making voyage through international waters unavoidable.”