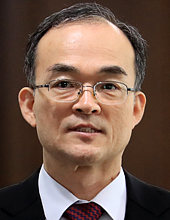 The nation’s top prosecutor said Tuesday that high-profile investigations into the irregularities and corruption allegedly committed by the previous conservative administrations will be wrapped up before the end of this year.

“It is never easy to say how long an investigation will take, but we will do our best to conclude major probes within this year,” Prosecutor General Moon Moo-il said during a meeting with reporters at the Supreme Public Prosecutors’ Office. He said prosecutors will be able to focus on cases concerning people’s livelihoods next year, once the major investigations are wrapped up this year.

President Moon Jae-in has been promoting a campaign to remove the “accumulated evils of the Korean society” and the prosecution is currently investigating allegations surrounding the irregularities, abuse of power and corruption surrounding the Lee Myung-bak and Park Geun-hye administrations.

“The current situation, whereby the entire prosecution is focused on the investigations requested by various ministries and government offices concerning the accumulated evils, will end before the year is out,” Moon said. “The National Intelligence Service [NIS] said it will make no more requests for a probe, and investigations into major cases are being wrapped up. It will be hard to conclude everything this year, but we want to complete major cases this year and wrap up the rest after next year.”

Moon also said the prosecution needs to speedily conclude its cases because prolonged investigations will not help society’s advancement.

As of now, the prosecution is investigating the NIS and the military’s illegal domestic operations to manipulate public opinion online during Lee’s presidency. The NIS was also marred in other scandals, such as diverting funds to the Park Blue House and obstructing the prosecution’s initial investigations into the online operations.

The prosecutors are also investigating whether the Lee and Park administrations systemically oppressed artists and celebrities critical of conservative politicians, while supporting those favorable to them.

When asked if the prosecution will investigate former President Lee, Moon avoided giving a definite answer. “We have to make a judgment based on the progress of the probe,” he said. “It is my belief that major cases raised by the NIS will be concluded.”

Moon also issued a muted criticism of the judiciary over its repeated rejection of prosecutorial attempts to detain suspects in major cases. “On the issues of detention and release, we need a clearer standard that is predictable and convincing to society,” he said. “If experts cannot make an accurate prediction, the current standard is inappropriate in a democracy.”

The prosecutor general’s remarks came as the prosecution summoned key confidants of former presidents Lee and Park as parts of two separate probes. Kim Tae-hyo, former senior secretary for the Blue House’s national security strategy, appeared at the Seoul Central District Prosecutors’ Office in the morning for questioning. He is the first member of the Lee Blue House to be investigated over the military’s illegal domestic political operations during Lee’s presidency.

“I will faithfully and honestly answer questions,” Kim said before entering the prosecution. When asked if he had briefed Lee about the alleged operation by the military’s Cyber Command, Kim said, “I will explain. I want to speak about this later after making things clear.”

The prosecution suspected that Kim acted as a link between the military and the Blue House when the Cyber Command conducted political operations before the general and presidential elections in 2012. The command was accused of ordering agents to manipulate public opinion online by posting comments favoring the conservative president and denouncing his political opponents.

Former Defense Minister Kim Kwan-jin was questioned and detained for 11 days as part of the probe. He was recently released after winning a court petition.

Kim Tae-hyo was also suspected of relaying Lee’s orders to military officials that the Cyber Command must recruit more agents who were favorable to the conservative administration.

The prosecution barred Kim from leaving the country on Nov. 14. It also raided Kim’s home and his office at Sungkyunkwan University, where he is currently working as a professor.

The prosecution also summoned Rep. Choi Kyung-hwan of the Liberty Korea Party, former deputy prime minister for economy and finance minister of the Park administration, for questioning over the allegation that he had received a bribe from the NIS. Choi had agreed to show up at 10 a.m., but failed to do so.

Choi later said he will attend questioning after he cast a vote at the National Assembly on next year’s budget bill. He said the party leadership asked him to attend the voting, so he decided to follow those instructions first.

The four-term lawmaker is suspected of taking 100 million won ($91,200) in bribes from the spy agency in 2014, when he was finance minister. Prosecutors believe the money was paid to lobby him for retaining the NIS’s off-book funds, with which the spy agency allegedly paid Choi. At the time, liberal opposition parties were pushing a plan to scale down the special operations funds, citing the untraceable nature of money.

The prosecution initially asked Choi to attend a questioning on Nov. 28, but Choi rejected the demand. The session was rescheduled for Tuesday, but Choi once again delayed his appearance.