Hwang Youn-joo of Suwon Hyundai E&C scored her 5,000th career point during a game against Hwaseong IBK Altos at Suwon Gymnasium on Tuesday, becoming the first player in either men’s or women’s professional leagues to reach the milestone. Despite Hwang’s performance, Hyundai lost 3-2 to the Altos. 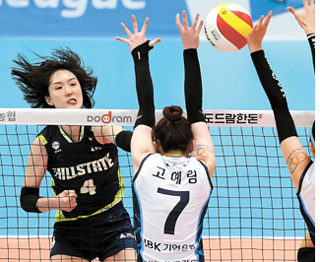 Hwang Youn-joo of Suwon Hyundai E&C during a game against Hwaseong IBK Altos at Suwon Gymnasium on Tuesday. Though Hyundai lost 3-2, Hwang scored her 5,000th career point during the game and was also given the Perfect Attendance Award, for her consistency over the past 14 seasons in the V-League. [YONHAP]

“It’s disappointing that our team lost,” Hwang said. “Rather than achieving personal records, it’s better for our team to win. Part of me feels a little uncomfortable.”

In addition to scoring her 5,000th career point, Hwang was also presented the Perfect Attendance Award, for her consistency over the past 14 seasons in the V-league.

On the men’s side, Park Chul-woo leads the league with 4,315 points.

Starting the game only ten points away from achieving the 5,000-point milestone, Hwang was under quite a lot of pressure. She only scored three points in the first two sets.

“A lot of people have had such high expectations in the past two weeks,” Hwang said. “I wanted to achieve the record as fast as I could. Over the past two or three matches, even just a point was valuable to me.”

Hwang started playing volleyball in eighth grade, quite late compared to her teammates. In addition to the late start, Hwang also suffered from a major injury during high school and had no confidence in herself when she first became professional.

“I didn’t really think about playing professionally,” Hwang said. “Because I thought the other players were a lot better than me. When I first joined, I just told myself to stay in the league for five years [the length of her contract]. The addition of foreign players and the height difference just made me feel weaker. I think I was able to get to this point only because I told myself that I need to improve my defense if my offense wasn’t working.”

Despite her low confidence, Hwang had a successful rookie season, winning the Rookie of the Year award. She continued her success even after joining Suwon Hyundai E&C and has gone on to win a total of five Championships - three times with the Pink Spiders and twice with Hyundai. Not only that, Hwang still holds the record for winning the MVP award at all three championships - the All-Star Game, the regular season title and the league Championship ? in the shortest amount of time.

Aside from the awards and the stats, it’s more impressive that Hwang has played consistently over the past 14 seasons without any major injuries.

“I think consistency is my strength,” Hwang said. “It feels great to receive the Perfect Attendance Award.”

She is especially proud for getting titles that have not yet been reached by any other players.

“It’s meaningful in a sense that my achievements will be the standard for others,” Hwang said. “Later, a different player will compare their own record against mine.”

“I was able to achieve this record thanks to my teammates,” Hwang said. “The setters helped me a lot and I have worked well with them. I can’t repay everyone for the help I received, but I want to repay my teammates now. I think I’ll prepare a little gift for my teammates, like what Lee Da-yeong did after winning the MVP in the first round.”