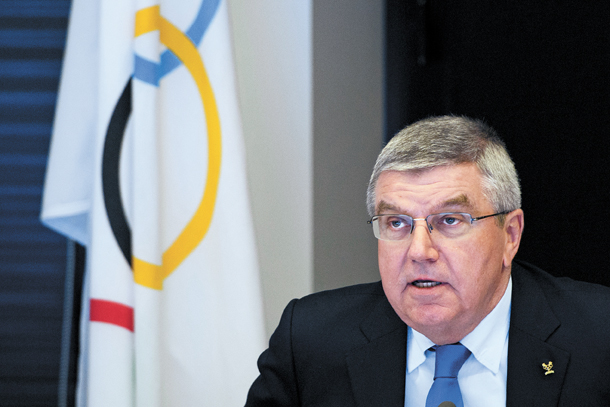 International Olympic Committee President Thomas Bach speaks prior to the opening of the first day of the Executive Board meeting at the IOC headquarters in Lausanne, Switzerland, on Tuesday. [AP/YONHAP]

The International Olympic Committee (IOC) has banned Russia from the 2018 PyeongChang Winter Olympics, after a meeting on Tuesday at the IOC headquarters in Lausanne, Switzerland.

But individual athletes who passed the doping test will still be allowed to compete. However, they will be categorized as “Olympic Athletes from Russia” and will have the Olympic anthem play if they win gold.

“This was an unprecedented attack on the integrity of the Olympic Games and sport,” IOC President Thomas Bach was quoted as saying on the Olympics website. “The IOC EB, after following due process, has issued proportional sanctions for this systemic manipulation while protecting the clean athletes. This should draw a line under this damaging episode and serve as a catalyst for a more effective anti-doping system led by WADA [World Anti-Doping Agency].”

While the IOC banned the Russian Olympic Committee’s qualification, the IOC also barred the participation of the Russian Ministry of Sport at the 2018 PyeongChang Winter Olympics. Vitaly Mutko, Russian deputy prime minister, was banned from the Olympic Games for life. This is the first time the IOC has banned a specific country’s participation at the Olympics since South Africa in 1964.

In addition to Russia’s ban, the IOC fined the Russian Olympic Committee (ROC) $15 million, as much money as the IOC spent drug-testing international athletes.

Russia’s anti-doping scandal was first revealed in the Richard McLaren report, released by WADA right before the 2016 Rio Olympics. The report showed that Russia’s Ministry of Sport has protected about 1,000 doped athletes by switching urine samples since 2011. Once revealed, the IOC invalidated 25 Russian athletes’ records at the Olympics and 11 athletes had their medals taken away.

The absence of Russian athletes will also have a negative impact on ticket sales, in addition to the absence of the National Hockey League (NHL) players. As Russia is considered a powerhouse for the Winter Olympics, it’ll leave a lot fewer fans in attendance.

Currently, Evgenia Medvedeva is the top-ranked female figure skater. Medvedeva, who holds the world record total score of 241.31, is considered the most likely figure skater to win gold, as she won the World Championship, the Grand Prix Final and European Championships for two consecutive years. And Russian athletes have finished among the top of the leaderboard in bobsled, luge and snow events like biathlon and cross-country skiing.

Also, the Russian short track skater Victor An, known as Ahn Hyun-soo, may not participate. An won three gold medals at the 2006 Torino Winter Olympics, representing Korea, and by acquiring a Russian passport, he won another three gold medals for Russia at the 2014 Sochi Winter Olympics. As he will turn 33 next year, PyeongChang is probably his last chance to participate.

Now that the country has been banned, the Kontinental Hockey League (KHL) may also prevent all its active players from participating in the Olympics, just as the NHL did earlier this year.

Despite all this, the PyeongChang Organizing Committee for the 2018 Olympics & Paralympic Winter Games (Pocog) said they respect the IOC’s decision in allowing the athletes to compete as individuals.

“I think the IOC came up with the second-best alternative,” Lee was quoted as saying on Yonhap. “Athletes who are clean will still be able to participate and win medals. I think it’s fortunate that the IOC will at least allow that, and we welcome that decision.”

The ROC will make its final decision regarding the participation of its athletes as individuals on Dec. 12.