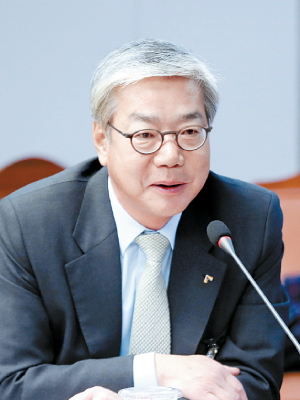 As late as last week, close followers of Korea’s financial industry were confident that Hwang Young-key, chairman of the lobbying group that represents local brokerages and asset management firms, would run for a second term.

But then on Monday, he announced he would not seek re-election at the helm of the Korea Financial Investment Association, citing contrasting views with the current government. His decision reflects brewing tension between the Financial Services Commission and the industry it regulates, as financial institutions feel the regulator is overstepping its boundaries by indirectly intervening in the selection of the association’s top post.

In remarks suspected to be aimed at Hwang, Choi Jong-ku, chairman of the Financial Services Commission, said last month that it was “not appropriate if a person from a large conglomerate becomes head of a financial association thanks to the support of companies.”

Choi refrained from mentioning a specific person or association, but some suspect the main target was Hwang based on his background at Samsung, where he served as head of the international finance team and personnel department of Samsung Group, corporate treasurer at Samsung Electronics, and president and CEO of Samsung Investment Trust Management.

“I feel that the conditions under the current administration are different from those in the past,” Hwang said during a news conference Monday. “I believe I am not the type of person who can go hand in hand with the current needs at this time.

“I am not welcomed by the current government,” he said, describing himself as a “persona non grata.”

Several former executives of financial companies have thrown their hat in the race. Jung Hoi-dong, former chief executive of KB Investment & Securities, was the first to make public his intention to become head of the association on Tuesday.

Other possible candidates include Choi Bang-gil, former CEO of Shinhan BNP Paribas Asset Management, and Hwang Sung-ho, former head of Woori Investment & Securities, though none of them made an official announcement yet.

Hwang began serving as chairman of the Korea Financial Investment Association in 2014. He is widely credited with fending off the government’s strict regulatory control over the financial sector and introducing new financial products like the individual savings account, which allows individuals to manage their investments in multiple financial products through one account.

During his tenure, Hwang also called on the securities industry to consolidate, scale up and focus on more lucrative businesses like investment banking and corporate finance.