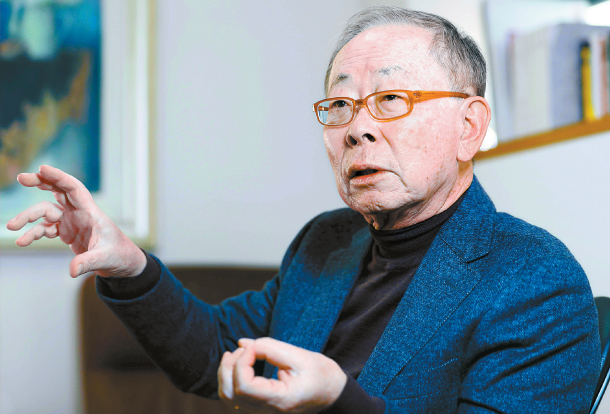 Korea’s former deputy prime minister, Lee Hun-jai, is known to have acted as a troubleshooter during the Asian financial crisis of 1998. Lee was appointed to lead the emergency committee in the midst of the crisis in 1997 and served as the first head of Financial Supervisory Committee the next year, during the Kim Dae-jung regime. Twenty years have passed since Korea’s economy hit rock-bottom. Lee says the economic revolution that was initiated at the time is “yet to be completed.”

The 73-year-old says Korean society is still struggling with an economic crisis and the decision-makers are acting irresponsibly. “Until now, it was somewhat difficult to talk about the qualitative and structural problems of the Korean economy,” Lee said in a recent interview with the JoongAng Ilbo. “Twenty years have passed [since the Asian financial crisis] — it’s time to get to the truth.”

After serving as Minister of Finance and Economy for two terms in 2000 and 2004, as well as a deputy prime minister in 2004, Lee has been working as chairman of Korea’s leading think tank, Yeosijae, since 2016.

Q. What do you make of Korea’s current economy?

A. Crisis is a departure from daily routine. But now, crisis has become routine. There should be a change in the crisis management system. I wonder if appropriate changes have taken place.

The Korean economy was once evaluated to have overcome the financial crisis. Has it?

Did the nation gain confidence from overcoming that crisis? It lead to even more devastation and mistrust towards the government. People began to look away from the crisis. If one overcomes an emergency situation, there should always be a lesson to learn from that crisis. But Korea didn’t manage to do that. Avian influenza breaks out every year, but how people deal with it doesn’t seem to change.

Why do you think the system hasn’t changed?

If you emphasize responsibility in certain cases too much, people start to avoid a situation where someone could become held responsible. In such an environment, civil servants who should be responsible for certain problems don’t do anything about it until a crisis genuinely breaks out. If they come up with preventive measure beforehand, but something goes wrong, they would have to take all the blame. For example, Sungnyemun Gate, a national treasure, was burnt down due to an arson attack in 2008 because nobody wanted to install preventive measures for a fire hazard out of worry that it might damage the cultural asset. Someone who came up with the measure would have had to take all the responsibility for it.

What do you think about how the government handled the economic crisis?

At the time, the market completely collapsed. Someone needed to make it work somehow. Everybody worked on how to make it operate again. So the first stage of crisis management was successful.

But what we lacked was how to come up with renewed measures and install them in the existing system. Everybody wanted to get over the crisis and forget about it as quickly as possible. That is why no follow-up measures were taken. That is why I call it an incomplete revolution.

How can you complete the “incomplete revolution”?

There was a critical change in Korea’s economy after the financial crisis. Its structure shifted from a government-led economy to a market-led one, but it was the government that lead the transformation. We need to look back and check if the shift fully took place. From now on, it should be the market that leads such changes.

How should the government structure change to deal with the current crisis?

First, the decision-making process should be done transparently. If a crisis breaks out now, authorities take infinite blame. But it shouldn’t be that way. It should be clear where the problem came from, such as deciding if it is the political or legislative authorities who mishandled the issue. All parties should approach the problem from an objective standpoint.

Do you think the latest issue related to the nuclear reactors Shin Kori 5 and 6 was approached properly?

It was a genuine attempt to solve the problem objectively. It was the first attempt to do so, so everything wasn’t perfect. Like it or not, Korea follows representative politics. Politicians and experts should discuss the issue extensively at the assembly and eliminate overly biased opinions.

Korea’s economy is projected to reach 3 percent growth this year. How do you gauge this?

We shouldn’t forget about optical illusions. During the financial crisis, too, Korea’s economy was evaluated to have been healthy with formidable exports. A similar situation is happening right now.

There are some chronic problems, such as the low birth rate and older society. China is fast chasing Korea, too. What should be done?

People say China is catching up. That is not the problem, though. China is just walking on the path it needs to walk. On the other hand, Korea is just in a flurry without moving forward. Of course, the low birth rate is a serious issue. But the female and elderly workforce is not even properly utilized. We are saying the nation’s growth potential is slowing down while we are not even properly using the potential workforce we already have.

The Moon Jae-in administration is hoping for income-led growth. What do you think about this?

It should all speak for itself once there is an outcome. Right now, what the president is talking about is all macro theory. There is no specific solution. It is hasty to evaluate the initiative now.

The government will hike the minimum wage next year. Is this a good idea?

It all comes down to the initiative’s sustainability. Minimum wage is associated with earned-income tax credit (EITC). The amount that cannot be covered by minimum wage could be covered by EITC. There should be a more sustainable and market-friendly way to solve the problem. Raising the minimum wage and shifting contract workers to regular employees could lead to there being fewer jobs.

The government is also seeking a significant boost in the number of civil servants. Is this a good thing?

Raising the number of civil servants is something that cannot be taken back. With the development of artificial intelligence, civil servants are likely to become an unnecessary workforce. Also, if those who receive higher education all want to become civil servants, it will eventually lead to a productivity drop nationwide.

How should one raise a creative workforce?

The way students take the scholastic aptitude test hasn’t changed once for the past 20 years. All the students take it at the same time on the same day. Such standardized way of evaluating students cannot generate a creative and diverse workforce.