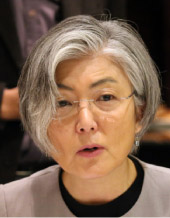 South Korean Minister of Foreign Affairs Kang Kyung-wha said that there is “no concrete evidence” that North Korea has “mastered the technology” to successfully deliver a nuclear device on an intercontinental ballistic missile (ICBM), in an interview with CNN that aired Tuesday.

Kang admitted that North Korea has developed its nuclear weapons program at “a pace that’s far faster than many of us have expected,” but that it has not “reached the final completion stage yet.”

Mastery of missile technology would require the North to demonstrate re-entry capability, as well as remote targeting or miniaturization.

North Korea declared last week, after the launch of its new Hwasong-15 ICBM on Nov. 29, that it has completed its nuclear program.

“We are absolutely confident about the U.S. commitment to the alliance,” she said, and reiterated her faith in its “overwhelming military superiority” against the North.

Kang also brushed off the bellicose rhetoric between North Korean leader Kim Jong-un and U.S. President Donald Trump, saying, “We don’t go by the daily comments - we go by the longer-term patterns.”

Kang continued, “What we seek is peace, and for us to have that peace, we must obtain denuclearization of North Korea.”

When asked of the concern of blundering into war with the North, the top Seoul envoy said, “That is precisely why we really need to show that we do have the defense posture, that we have a robust military preparedness, just in case anything happens.” She added, “Having contingency plans and having military options is one thing, but how you put it all together in support of a diplomatic solution is another.”

She went on to say that a clear message has to be sent to the North Korea regime: “Their dream of being acknowledged as a nuclear power is just a misguided notion that the international community will never accept.”