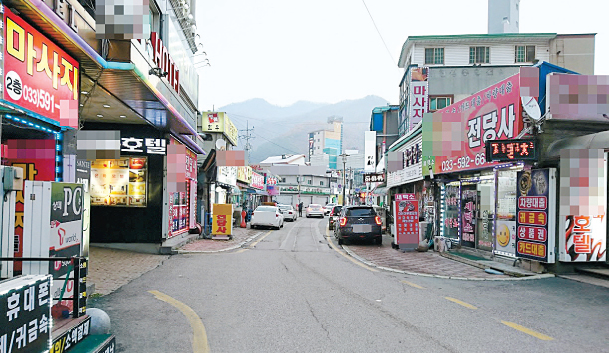 Motels, pawnshops and massage parlors near Kangwon Land in Jeongseon, Gangwon, are open and ready for business early in the morning. They are the busiest between 6 a.m. and 10 a.m., when Kangwon Land, the country’s only casino that accepts Korean gamblers, closes for a 4-hour break. [HAN YOUNG-IK]

This is the third part of a three-part JoongAng Ilbo series on the “homeless gamblers” of Jeongseon, Gangwon, home to Kangwon Land, the country’s only casino that accepts Korean gamblers. Around 1,000 people who have subsequently moved near Kangwon Land are now living in poverty. Many borrow money or work menial jobs to support themselves. Suicides are not uncommon.

Businesses in Jeongseon, Gangwon, revolve around the schedule of Kangwon Land, the only casino in the country that accepts Korean gamblers. When Kangwon Land takes a break from 6 a.m. to 10 a.m., Jeongseon’s motels and saunas try to cash in on the weary gamblers returning from their overnight sprees.

Through the day, Jeongseon’s pawnshops are popular destinations where gamblers pawn jewelry or other valuables. Even motels behave as an extension of the casino by selling customers “comps,” which are complementary services offered at hotels and restaurants to encourage players to keep gambling.

“The regional economy is abnormally structured to be completely dependent on Kangwon Land,” said one local Jeongseon community leader. Kangwon Land has sustained Jeongseon’s economy ever since its casino opened in 1998, following a government plan to revive the area after its mines were abandoned in the 1980s.

Kangwon Land managers, provincial and local authorities have expressed their desire to develop the company’s other attractions so that it won’t be identified only by its gambling services. Kangwon Land had previously announced its plan to establish a “family-centered resort complex” in 2004, hoping to take advantage of its proximity to Mount Taebaek, which is famous for its forests and snow.

Though the 2004 proposals failed to bear fruit, authorities have not discarded their dreams of transforming the Kangwon Land resort into Korea’s next Las Vegas.

“After assessing that we haven’t developed enough attractive cultural content,” said one public official from Jeongseon county office’s cultural tourism division, “we are trying to create various recreational spaces, like a forest park and a trekking course.”

“We plan to transform Kangwon Land into a hiking resort complex,” a Kangwon Land employee told the JoongAng Ilbo. “We will take note of Las Vegas’ success in decreasing its reliance on the casino economy and investing in performance shows and shopping centers that entire families can enjoy.”

Korean experts are benchmarking Las Vegas to transform Jeongseon into a vibrant tourist hot spot for families. Once a small desert railroad town, Las Vegas became famous as a gambling and prostitution destination after casinos sprung up in the 1940s. But with the help of business magnates like Howard Hughes, who took interest in developing the crime-ridden city into a respectable entertainment district, Las Vegas was able to mature into a global tourist attraction.

Enghien-les-Bains, a small French commune in northern Paris, also relies heavily on its casino industry. Remarkably, this small town of 12,000 invests 15 percent of its gambling profits on art and culture. This has allowed the city to emerge as one of France’s greatest producers of media art exhibitions, concerts and festivals. The town has since received international acclaim, being designated as a Unesco City of Media Arts in 2013.

Before Jeongseon hopes to rise to the ranks of its American and French counterparts, however, Korean experts believe Kangwon Land should first address the issue of compulsive gambling. Jeongseon is believed to be hosting over a thousand “homeless gamblers,” a misnomer referring to non-locals who move closer to the casino to gamble away entire fortunes without restraint.

“In Jeongseon, we can observe a unique phenomenon that doesn’t occur in the rest of the world,” explained Kim Nam-jo, a tourism science professor at Hanyang University. “Here, gambling addicts stay long-term and dedicate their lives.”

“The government has recommended guidelines and comprehensive policy responses to address smoking, but there is no equivalent for gambling,” said Eulji University Prof. Kim Young-ho.

A recent Kangwon Land report revealed that it spent 8.53 billion won ($7.85 million), or 0.5 percent of its total gambling revenue, for addiction prevention and treatment in the past three years via the Kangwon Land Addiction Care Center. In Australia and Canada, gambling establishments are required to spend two percent of their revenue on providing such services.

“Given that Kangwon Land’s main business involves gambling,” suggested Kyung Hee University Prof. Lee Choong-ki, “it needs to be audited for the ‘soundness’ of its operations.”