After 8 years, Ji wins a tournament

After 8 years, Ji wins a tournament

Ji Eun-hee may not have finished within the top ten on the 2017 money list or played well in the major tournaments, but she did manage to leave quite an impression on the LPGA Tour this season, winning a tournament for the first time in eight years, after 203 tournaments. 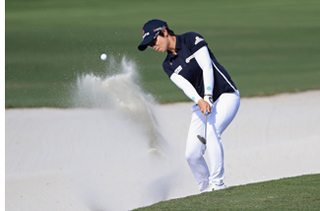 Ji Eun-hee hits a bunker shot during the third round of the CME Group Tour Championship at Naples, Florida, in November. [KLPGA]

“Golf has been fun lately,” Ji said. “Looking at my eight years, I don’t think I was in a slump because I was consistently ranked inside the top 70 on the money list and maintained my seed. Since I finished inside the top five from time to time at tournaments, I couldn’t give up. And I finally gained my confidence with a win. This victory will be a big help in my golf career.”

Since her amateur days, Ji has been an elite player, being a part of the Korean national team with Choi Na-yeon, Park Hee-young and Song Bo-bae. After making her LPGA Tour debut in 2007, Ji continued with a victory at Wegmans LPGA in 2008 and the U.S. Women’s Open in 2007.

But a swing change led Ji to struggle, as she started going downhill after finishing 13th in the money list for the 2009 season, earning $937,284. It took Ji eight seasons to make a comeback, winning the Swinging Skirt LPGA Taiwan Championship in October. She finished 23rd in the money list this season, earning $802,760. Not only was this Ji’s best finish since 2009, she also became the third Korean golfer, after Ku Ok-hee and Pak Se-ri, to win a LPGA tournament in her 30s.

But despite her troubles, she has no regrets about the swing change.

“Before, I used my upper and my lower body together,” Ji said. “That made my lower body less stable, which made my swing inconsistent. Now, I lock my lower body and drop the club by using my upper body more. This allows me to have more power and increased swing speed. I also have better contact.”

“I have my own standard and I would give myself a score of 70 this season,” Ji said. “It just didn’t meet my standard for the swing and style of play that I wanted. But since I’m playing well, I want to win more. I want to show younger players that they can still win even when they’re old.”

Until Ji retires, she has still bigger goals to achieve.

“I won the U.S. Women’s Open, but I haven’t won a title yet,” Ji said. “I want to be the money leader and win the Player of the Year award.”

And Ji believes it’s possible, if she continues her training routine. Of the tournaments played this season, Ji chose the CME Tour Championship as the most disappointing, though she finished the best among Korean golfers, tied for fourth at 13 under par.

“If I didn’t miss the two short putts, I think I had a chance of heading to the playoff with a potential to win,” Ji said. “It was disappointing that the two bogeys were made from putting mistakes rather than shot mistakes.”

Since Ji was at her best by the time the season ended, she felt as if the season went by too quickly. Now, in the offseason, Ji will focus on her goal for the 2018 season.

“I’ll practice for another month or so,” Ji said, “and then decide upon my goal for next season.”