Lobbyists in the Assembly

Lobbyists in the Assembly 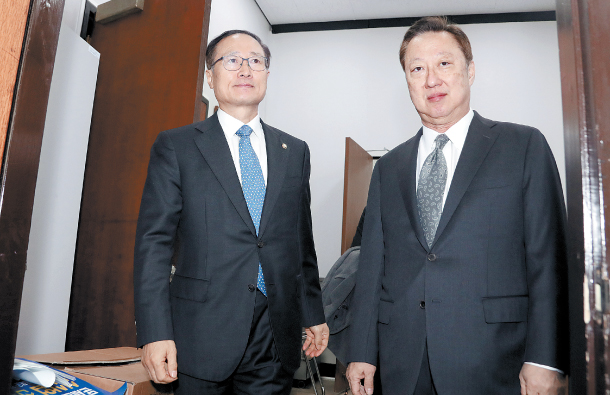 Park Yong-maan, chairman of the Korea Chamber of Commerce and Industry, right, and Hong Yong-pyo, a Democratic Party lawmaker and head of the National Assembly’s Environment and Labor Committee, after a meeting at the National Assembly in Yeouido, western Seoul, on Thursday.

Park, the former chairman of Doosan Group, relayed the business community’s concerns about a minimum wage increase next year and a bill that would reduce the number of legal work hours in a week.

“While the implementation of the higher minimum wage is just less than a month away, there has been no legislative effort to improve the system and the bill to reduce work hours is being stalled,” Park said. “It will be difficult to dodge the confusion that will start next month, but if the National Assembly continues to run parallel and fails to make anything happen, their responsibility will be heavy.”

Companies are worried about higher labor costs if the maximum number of work hours in a week is reduced to 52 from 68.

The Liberty Korea Party, the legislature’s largest opposition party and generally pro-business, has proposed reducing holiday pay as a compromise.

The Democratic Party, which has a majority in the legislature, and the People’s Party, the third-largest party, have strongly protested the deal. [YONHAP]