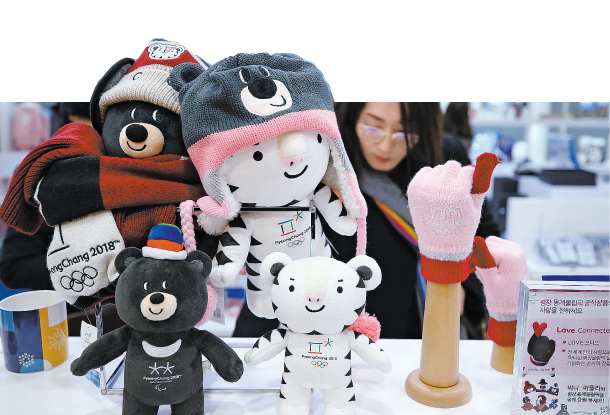 With two months left until the 2018 PyeongChang Winter Olympics, retailers are boosting marketing activities to take advantage of the event, especially after the runaway success of a limited edition PyeongChang coat sold by Lotte Department Store.

Even companies with no official connection with the games are climbing on the bandwagon.

Lotte Department Store started selling long “bench coats” - like those athletes wear when sidelined during games - in late October. Sales were sluggish for the first few days, but the weather turned cold and word spread that the PyeongChang coats were half the price of similar products made by other brands.

The fact that Lotte’s coats were a limited edition of only 30,000 units was another attraction for customers. After the last batch sold out last week, Lotte said it had no plans to manufacture more.

The first huge success of a PyeongChang limited edition was especially good tidings for other official partners of the winter Olympics-a status granted to companies that offer financial contributions or services and products for the games.

Lotte Department Store is the designated retailer for the PyeongChang Olympics’ official licensed goods from gloves to stuffed mascots. The company started taking orders for “PyeongChang sneakers” last Friday, just a day after the bench coats sold out.

As with the bench coat, the sneakers will have the official slogan - “Passion Connected”- emblazoned on them on patches. They will also be cheap: 50,000 won ($45). The first batch off the production line was 50,000 pairs, and the company has already gotten orders for 85,000. All orders will be filled.

Outdoor brand The North Face is another partner, and last Friday it unveiled an array of 60 products labeled the “PyeongChang 2018 collection.” The company is also a designated supplier of clothes and outerwear for athletes on Korea’s national team.

The lineup is comprised of products including heavy coats, cotton shirts, winter gloves and mufflers. All items bear the Olympics emblem or words like “PyeongChang 2018” or “Team Korea.” One down coat is a limited edition of 2,018.

McDonalds announced last month that it would develop a “PyeongChang burger” using hanwoo, or Korean beef, produced by a cooperative in Kangwon Province. Pyeongchang and some of its neighboring cities are known for growing the country’s highest quality beef. Companies that are not official partners can be fined for conducting marketing activities that tries to exploit the 2018 PyeongChang Olympics.

According to a PyeongChang Olympics law that went into effect in July, companies that are not sponsors or supporters are obliged to receive official permission from the event’s organizing committee to market products be referencing the games.

If symbols that evoke the Olympics such as logos or mascots are used, executives of the company or organization can be sentenced to up to five years in prison or fined up to 50 million won.

On Thursday, SK Telecom was accused of violating the law by using “2018 PyeongChang” and a pictogram similar to the Olympic skiing symbol in a television commercial. Both are registered trademarks of the Olympics.

The commercial ended with the a written tagline “SEE YOU in PyeongChang” and showed figure skater Kim Yuna, an honorary ambassador for the winter Olympics.

The Olympics organizing committee sent SK Telecom a document telling it to pull those ads. Rival KT has marketing rights as an official Olympics partner.