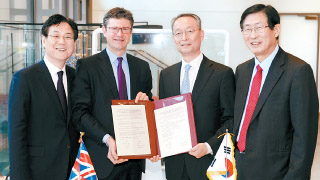 Kepco said late Wednesday that it entered exclusive negotiations with Toshiba, which owns 100 percent of NuGeneration and is building three nuclear reactors near Sellafield in Cumbria. The Moorside nuclear power station is a $19 billion project.

“Kepco and Toshiba will start months-long negotiations for the takeover of the stake in NuGen,” said the state-run company in a statement, warning that its status as preferred bidder did not mean it had sealed the deal.

It added that the Korean government would also conduct a feasibility study into the project. Approval by the British government is required for Kepco to own NuGen.

Toshiba put NuGen up for sale as part of a restructuring plan to cover losses from its nuclear power business in the United States.

The electricity provider said that a contract to control ownership of NuGen could be signed during the first half of next year if the negotiations succeed. It would be Kepco’s first foray into the U.K. nuclear market.

The U.K. generates around 20 percent of its electricity from nuclear power plants and is one of the few developed nations still pursuing nuclear power, in contrast to Germany, which wants to shut down all nuclear reactors by 2022.

If the deal comes through, it will be the first overseas nuclear power plant deal for Kepco since 2009, when it won a bid to build four nuclear reactors in the United Arab Emirates. That construction is now in its final phase.

The news came two months after a new generation of Korea’s APR 1400 reactor gained approval for export to Europe from the European Utility Requirements. The third-generation reactor is built to withstand earthquakes of up to magnitude 7 and will be the model for the three reactors in the Moorside project.

While the Moon Jae-in government is seeking to reduce Korea’s dependence on nuclear energy by reducing the number of active nuclear power plants to 14 by 2038 from the current 24, it is still trying to export Korean nuclear technology. Moon wants to raise the amount of power generated by renewable sources to 20 percent by 2030 from the current 4 percent. Korea currently depends on nuclear energy for a third of its power.

Meanwhile, Kepco announced that President Cho Hwan-eik, the longest-serving CEO of the company, will step down on Friday, three months earlier than the end of his tenure in March. Cho became president in December 2012.

Cho was quoted by the company in a press release as saying he was “pleased to retire with the heightened possibility of securing the Moorside project.”