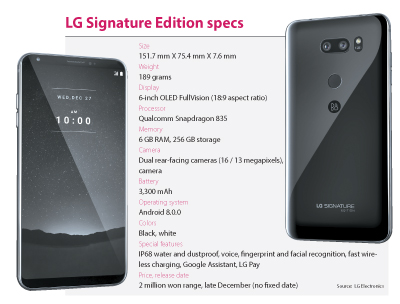 LG Electronics is releasing a limited-edition luxury smartphone as part of its high-end Signature series of consumer electronics at the end of this month.

With a price tag of over 2 million won ($1,820), the LG Signature Edition is set to be even more expensive than the iPhone X.

The company said in a press release Thursday that the audacious phone will boast “refined beauty, top-notch essential functions and innovative usability” in line with the brand identity of Signature.

LG has been selling high-end televisions, washing machines, refrigerators and air purifiers under the Signature brand in Korea, the United States and Europe.

“We have combined extraordinary premium value unseen before in the LG Signature Edition,” Choi Sang-gyu, president of the Korea sales division at LG Electronics, said in the press release.

The company plans to make just 300 phones, and they will only be available in Korea.

This is not the first time that LG Electronics, which has been suffering from flagging phone sales, has come up with a special-edition model to differentiate itself. The Chocolate Phone, with its minimalist design resembling a candy bar, was a hit when it came out in 2006 and briefly boosted LG’s standing in the global market to third.

The following year, LG collaborated with Prada on a phone that sold over a million units.

But ever since the advent of smartphones, LG has been on a downward slide and remained outside the top five in the global smartphone market in the past few years.

For the LG Signature, the company used non-scratch zirconia, a material often found in luxury watches like those from Chanel, for the back of the device. The phone will come in two colors - black and white - and covered in a delicate gloss for a more elegant feel.

The LG Signature has a 6-inch OLED FullVision display and minimal bezel on all four corners for more comfortable grip, LG said. There are two cameras in the back and one in the front, and the phone comes with six gigabytes of RAM, the same as Samsung’s Galaxy Note8, that will allow for better multitasking. The storage capacity is 256 gigabytes, double the space on LG’s most recent smartphone release, the V30.

For buyers of the phone, LG Electronics is also throwing in wired and Bluetooth headphones from Bang & Olufsen, a high-end Danish consumer electronics producer.

Premium after-sales service is offered to the buyers as well, with users able talk to dedicated customer care providers around the clock and have their name engraved on the back of the phone with a laser.

The exact price and date of release has yet to be announced.